Sid Blanks and Life Beyond Football

Sid Blanks and Life Beyond Football 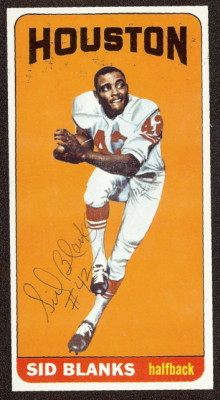 Sid Blanks was a talented running back for the Houston Oilers and Boston Patriots from 1964-1970. A product of Texas A&M-Kingsville, Blanks had 756 rushing yards as a rookie in 1964, and led the AFL is rushing touchdowns with six. He was selected to play in the AFL All-Star Game that season and was thus a part of the All-Star Game Boycott in New Orleans in January 1965. Sadly, Blanks blew out a knee in training camp in 1965. He sat out the entire ’65 season and though he returned to play five more seasons, he never fully returned to his pre-injury form.

As an autographed card collector, I have long known that former Houston Oilers running back, Sid Blanks, is a tough signature. Blanks is still living, but mail requests to his home have gone unanswered for years. Those in the hobby figured that he either held a grudge against football or tired of people asking for his autograph. I recently began googling Blanks in with the thought of attempting another autograph request. Internet resources have been pretty slim in years passed, but I found several recent stories about Sid Blanks and his granddaughter, Riley.

Through an article on the KVUE website and a subsequent video of Riley’s, I learned that Sid Blanks was diagnosed with Parkinson’s Disease in 1997. It is believed that the disease was brought about by his time playing football. The following video is sweet and sad. It shows the love a family has for their patriarch and how they have come together to care for this man for more than 20 years. It shows a former football player who seems appears happy in spite of the tough hand he has been dealt, and a man who still loves the game in spite of the decades of health issues it brought to his life.