I was bouncing around YouTube this evening when I stumbled across this Chiefs highlight reel from 1963, their first year in Kansas City.  This team, which had won an AFL championship the previous season in their final incarnation as the Dallas Texans, finished in third place in the AFL Western Division with a 5-7-2 record.  After starting the season with a 59-7 drubbing of the Broncos in Denver, the Chiefs tied Buffalo, lost to the Chargers and beat the Oilers for a respectable 2-1-1 record after four games.  Six losses and a tie later however, and the Chiefs were too far behind the Chargers and Raiders to have any hope of taking a second consecutive division title.

Though the season didn’t end up as they may have hoped, the groundwork was already being set for greatness.  Kansas City’s 1963 draft class had included Buck Buchanan, Ed Budde, Bobby Bell, Jerrell Wilson and Dave Hill.  The Chiefs went 7-7 in 1964, 7-5-2 in 1965, and the following year won the league championship and represented the AFL in Super Bowl I. 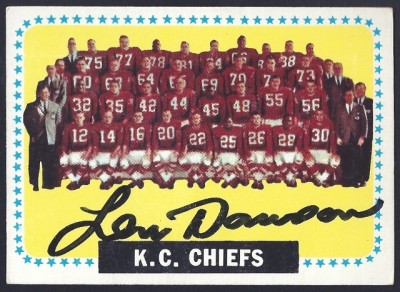