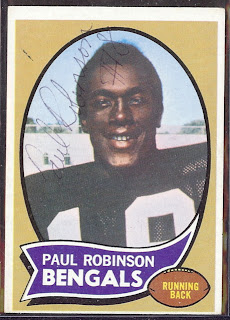 Paul Robinson grew up in the small town of Marana, Arizona, where he was a talented track athlete in addition to playing basketball and football.  He graduated from high school in 1963, and after time spent at a junior college, earned a track scholarship to the University of Arizona.  Robinson ran track for two years at the U of A, but played only one season of collegiate football before being drafted by the Cincinnati Bengals in the third round of the 1968 AFL Draft.
Robinson’s first contract paid him a $15,000 base salary, with a $15,000 signing bonus.  For their $30,000 investment, the Bengals got themselves the AFL’s Rookie of the Year.  In his rookie year, which was also the Bengals first year in existence, Paul Robinson rushed for 1,023 yards and scored eight touchdowns, which made Robinson just the second player ever to rush for more than 1,000 yards in his first year of professional football in the United States.  The other was the legendary Cookie Gilchrist, who ran for 1,096 yards for the Buffalo Bills in 1962.
After finishing second only to Joe Namath as the league MVP in 1968, Paul Robinson’s numbers dropped off in later years, but he played another six years in the AFL & NFL.  When Paul Robinson left the NFL after the 1973 season, he had carried the ball 737 times for 2,947 career rushing yards and 24 touchdowns.  He also had 90 receptions for 612 yards and two scores.  Paul Robinson spent the 1974 season with the Birmingham Americans of the World Football League, where he helped the Americans win the WFL’s only championship game before the league folded at the end of the season.
By Todd Tobias|2012-03-26T16:51:00-07:00March 26th, 2012|AFL, American Football League, Cincinnati Bengals, Paul Robinson|10 Comments