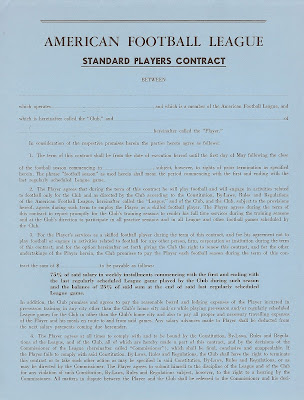 I have a love-hate relationship with Ebay, but one of the things for which it is absolutely fantastic, is being able to pick up oddball items pertaining to whatever you may collect.  I have been able to purchase numerous interesting AFL-related items on Ebay over the years, the most recent of which arrived on my doorstep just last week.  For a whopping $3.24 + shipping, I am now the owner of an unused copy of the American Football League Standard Players Contract.  This contract, which came to me in triplicate (white copy to be held by the league office, yellow for the member club, blue to be returned to the player), is a simple four-page document that outlines the payment schedule, amount, and various rules that AFL players had to abide by during their time in the league.
Of the 17 points detailed int he contract, the one pertaining to payment schedule reads that the player will receive”75% of said salary in weekly installments commencing with the first and ending with the last regularly scheduled League game played by the Club during such season and the balance of 25% of said sum at the end of said last regularly scheduled League game.”
Though room and board, food and traveling expenses are also mentioned, the contract does not specify payment for preseason games.  But to give you an idea in that regard, former Dallas Texan and Kansas City Chiefs end, Chris Burford, recently posted an image of one of his preseason checks online.  The single game check was for $48.
The remaining 16 points cover the player agreeing to abide by league rules, to be governed by the league commissioner, to not engage in dangerous activity that could put his ability to play football at risk, the details of what should happen in the event that the player is injured while under contract, and/or drafted into the Armed Forces.
The back page lists the “Club Rules and Regulations.”  Most are understandable and reasonably clear.  However I found item #2 rather funny.
2.  Drinking of intoxicants is forbidden.
I am guessing that roughly 98% of this league, which was made up of young men, many of them single and enjoying some money and a bit of popularity, was in direct violation of their contract on an almost daily basis.  Perhaps those rule was generally ignored by both players and officials? 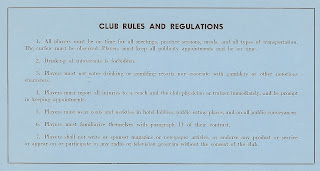