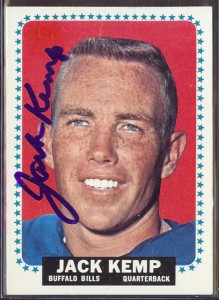 One of the subscribers to the Tales from the American Football League Facebook page recently brought to my attention an article written by known AFL-hater, Tex Maule, back in the November 16, 1964, issue of SI, a link to which can be found HERE.  I read through the article and was just shocked at the disregard given the 1964 Buffalo Bills (and the entire AFL, for that matter), by this “knowledgeable” football writer.

Maule runs through a potential Colts vs. Bills matchup on a position-by-position basis, while mixing in a few pot-shots at other AFL teams and the league in general, along the way.  Among Maule’s statements that particularly stuck out to me…

Maule bases a good portion of his article on a quote that he received from an unnamed AFL assistant coach who stated that AFL defensive units had not played together long enough to have the cohesiveness necessary to play top-quality football.  This coach seems to believe that a unit needs to be together four-or-five seasons for players to be able to anticipate each other’s moves and react accordingly.  That is all fine and good, but Maule, and said AFL assistant are overlooking the 1961 San Diego Chargers, who after replacing two of their four defensive linemen with rookies in 1961, went on to set a record (that still stands!) with 49 interceptions in a single season.  Additionally there is no mention of the Chargers of 1963, whom many believe would have given the NFL champion Chicago Bears all that they could handle and perhaps a lot more in head-to-head competition.

But perhaps the most wanton dismissal of talent by Maule is of the ’64 Bills themselves.  That team, and the one that followed the next year, possessed one of the AFL’s great defenses.  Day, Sestak, Dunaway, McDole and company across the line, Stratton, Maguire, Tracy and Jacobs at linebacker, and a secondary of Byrd, Edgerson, Saimes, Clarke and the rest…  No way this team would have rolled over in head-to-head competition with the NFL.

I understand that Maule was an “NFL guy,” but how does Sports Illustrated print this drivel?  And where is SI’s “AFL guy” to counterbalance this stuff?  It reminds me of a saying my old boss, Bill Adams, had.  “Don’t get into a pissing match with a guy who buys ink by the barrel.”  Tex Maule had the platform, and apparently said whatever he wanted, regardless of how ridiculous it may have been.