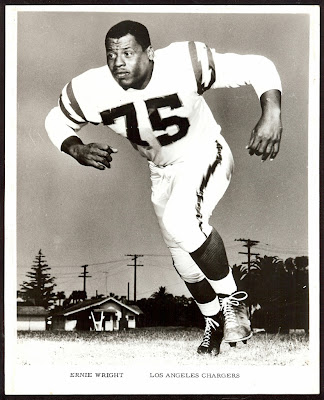 In recognition of February being Black History Month, stories this month will pertain to racial issues in the American Football League.  The post for this week contains part of an interview that I conducted in 1998, with Chargers and Bengals offensive tackle, Ernie Wright.  Wright was an original Charger, joining the club in Los Angeles in 1960.  He moved with the team to San Diego, where he was a fixture on the offensive line for the next several years.  Wright was picked up by the Cincinnati Bengals in the 1968 AFL Expansion Draft, and played four seasons in his native Ohio, before coming back to the Chargers for his final season in 1972.  Wright was a three-time AFL All-Star, and one of only 20 men to play in all 10 seasons of the AFL.  He was successful in his post-football life, first as a sports agent, and then in operating a series of detention centers for people convicted of misdemeanors.  Ernie Wright passed away on March 21, 2007, after a battle with cancer.
The Chargers never had any racial conflicts within the team itself.  We ran into racism in other places.  I was at a roast for Sid Gillman and one of the things I said after I had roasted him for awhile, is that I really don’t believe Sid Gillman has ever had a prejudiced bone in his body.  When I started in 1960, we all knew the NFL had a quota for blacks.  There always was an even number of them, so when you were on the road you’d always have two blacks together.  There were no blacks that were on the bench.  Everybody that was black on the team was playing.  They weren’t developmental players, they weren’t reserves, they weren’t back ups.  If you were black, you were playing.  Sid Gillman, from the day we started, you could room with anybody you wanted to.  Sid’s only prejudice was against people that wouldn’t play and wouldn’t work at the game.  He loved to be around talented people.  He loved to be around people who wanted to win.
Even going back to the first time we went back to Houston, 1960, we played the Oilers and then went to Dallas to play the Dallas Texans.  We’re owned by Barron Hilton, Hilton Hotels.  They’ve got big Hilton Hotels in both those places.  We stayed at the dormitories at Rice because we couldn’t get in the hotel.  In Dallas we stayed outside at a godforsaken, little country-ass prarie town full of crickets, called Grand Prarie, Texas, because that was the only hotel that would let blacks into it.  We were on the third floor and had crickets in the room.  I’ll never forget that.  So we organized a protest, and the next year, 1961, when we went to Houston, we then stayed in the Hilton.  The members of the San Diego Chargers were the first blacks to stay in the Shamrock Hilton as guests. 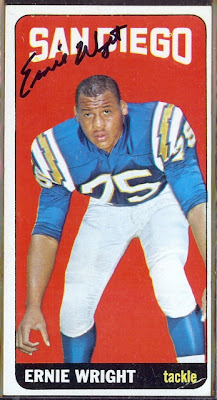 We had some other situations.  We were playing in Atlanta and next to the hotel we were staying at they had a mall that had a billiard parlor in it.  Billiard things were real big and it had 20 or 30 tables.  Of course, being competitive, we wanted to see who was the best pool shooter.  So 12 of us or so went over there, half black, half white.  The guy working there, we asked for the cues and the balls and the stuff and we saw him on the phone.  About 15 minutes later he came back and he said, “some of you guys can’t stay here.”  We’re all shooting pool and, “What?”  So he said that the owner said that some of you guys…”What do you mean, ‘some of you guys?’”  “Well, you colored,” in those days we were colored, “you colored boys, you colored guys can’t stay here.”  So we went back to Sid and said, “we’re not playing in the exhibition game tomorrow.  If we can’t be treated like human beings, we not going to play a game.”  This was a Friday night, the game was supposed to be Saturday night.  By Saturday morning the Governor of Georgia, the Mayor of Atlanta, everybody was out there making all kinds of problems and so on and so forth.  We did end up playing, but it became national news and in it’s way contributed to the progress we see now.
I remember one other incidence that we had; we had an AFL All-Star Game.  The first couple were out here, and then we were going to have one in New Orleans.  Sid was going to coach the West team.  We land in New Orleans and the cabs were picking up the white players and taking them to the hotels and telling us we’d have to find black cabs.  So, boom, again, we’re not going to play in this place.  So they moved the game to Houston.  The next year were flying to the All-Star Game in Houston and Houston’s locked in so we go on to New Orleans and come back to Houston the next day.  So we got to New Orleans and now we stayed in the Hilton right across the street from the airport.  We got in the cab to go down to the French Quarter, of course.  The cab driver happened to be black.  And so we’re talking, Dave Grayson, I don’t know if he was with the Raiders or Kansas City then, Earl Faison, myself, might be Ernie Ladd.  The driver heard us talking and said, “oh, you’re football players.  What you did last year has had a tremendous effect on New Orleans.  They want a pro football team here.  And after you guys refused to play here and it was on national press and TV again, they integrated the transportation.  Blacks didn’t have to sit in the back anymore. You can get any cab and so on and so forth.”  In this era of the ‘60s where they had all this civil rights stuff and the marches and sitting at the counters, we had an effect too.  We had an effect in a different way because everybody wanted sports franchises and athletes around.  So in many ways we had as equally powerful an effect as students did, but it took all of us to change.  But I will say one more time that I have never, in the years that I have been around Sid Gillman and his teams, never any inter-team racial – it just was not tolerated.  It’s us against them.  It’s like being in a foxhole when you’re being attacked.  You don’t care what color the other guys is or what gender she might be, if she can help you fight and save your life.
By Todd Tobias|2012-02-08T19:18:00-08:00February 8th, 2012|AFL, American Football League, Black History Month, Cincinnati Bengals, Ernie Wright, Los Angeles Chargers, San Diego Chargers, Sid Gillman|16 Comments