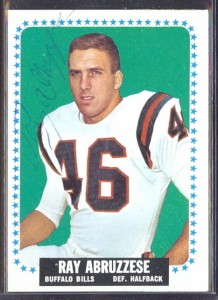 From Joe Namath, as printed in Going Long, by Jeff Miller – Howard [Cosell] and Dick Schaap and I were sitting in my living room.  Ray (roommate, Ray Abruzzese) was in the bedroom sleeping.  Ray came walking out in a T-shirt and these nylon shorts, wiping his eyes.  He looked up and saw Howard: “Oh Howard!”  In his Philadelphia accent.  “I thought you were on television!  I was just coming out to turn you off!”  Schaap and I died.  Howard sat there, just staring, his mouth agape.  After about 10 seconds, Howard started in on every Italian in the world. 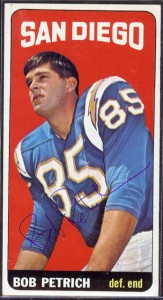 From Bob Petrich – So there was a guy named Chief Patterson.  Patterson was an Indian guy who used to play on the college circuit.  He even went to West Texas State the year before I was there.  He played about 10 years of college football.  Different names, you know.  Through the Southwest, the South.  Then he tried out with the Chargers.  He was a crazy guy.  They roomed him with Pat Shea.  Ernie Ladd was telling me this story.  They didn’t like each other, Shea and Patterson.  Shea was just raw animal.  So every night, what they would do is they would move the beds against the wall, move the chairs out, and they’d fight.  They would go at it.  Bang each other up.  Then, after they were done, they’d move all the stuff back and go to bed.  They’d do this every day.  You could hear them hitting the walls, the doors, but they’d move the furniture so they’d have room to fight. 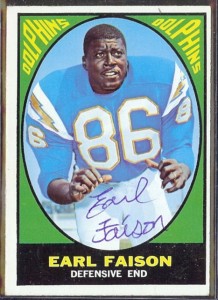 From Earl Faison – I remember one game in particular, my first year.  I was sitting on the bench and I looked across the track behind me into the stands and I see Charlie McNeil sitting in the stands.  So I knew I had seen Charlie McNeil in the locker room prior to the game.  We dressed close to each other.  I ran over to Ernie Ladd and I told him, “Ladd, the goddamn Sid has cut Charlie, he cut Charlie.  He cut him before the game.”  And he said, “No, no, Charlie’s down there.”  And I said, “Look behind me, look over there.”  And he looked in the stands and there was Charlie McNeil, or so we thought was Charlie McNeil.  Then we ran over to the defensive coach.  “Coach.  Charlie is in the stands.  Charlie is in the stands.”  The coach looked at us and said, “No.  Charlie’s standing right over there.”  Charlie had a twin brother and we didn’t know.  Looked just like him, the spitting image.