Here is a neat piece by Dave Steidel… 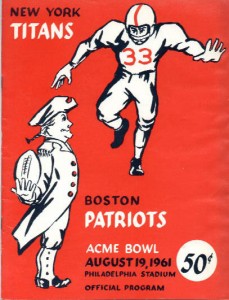 In today’s bloated world of college bowl games you will find a plethora of events around the country in sun soaked, exotic locations that entice teams to come and participate in what is pretty much the Who Really Cares Bowl.  Schools allow their 7-4 teams to play in front of half empty stadiums of friends and relatives, earn some easy cash for their programs, give the players and coaches a season ending warm weather vacation and help the sponsors put a feather in their corporate cap. The enticing locations haven’t changed much over the years from those back in the day when teams actually earned bowl invitations with top rankings or conference championships.  And as cities like Jacksonville, El Paso and Atlanta began to elbow their way into the bowl picture in the sixties with late December games other cities where also looking for their piece of the post-season pie.  Bowls also started showing up in eastern cities like Allentown, Pa. which hosted both the Cement Bowl and Eastern Bowl games on cold, snowy December days in 1961 and 1963.  Philadelphia hosted the short lived Liberty Bowl and Atlantic City, the long time home to the Miss America Pageant, in 1961 found themselves presenting the Boardwalk Bowl.   Football was looking to expand the horizon and all the extra bowls were well intended events to showcase locally successful teams and make a few bucks while giving fans one more chance to cheer on for their favorites.

The NFL jumped on to the bowl band wagon on January 7, 1961 when it played the first Bert Bell Benefit Bowl.  It soon became known as the Playoff Bowl and then the Runner-Up Bowl (also dubbed the Shit Bowl by Vince Lombardi) and was said to be a reward for the second place teams in the eastern and western divisions by sending them to the Orange Bowl in Miami to play each other in what was actually the consolation bowl for third place in the NFL.  Some will argue that the NFL competition committee created it to showcase more of their teams on national television due to the new competition from the AFL who televised their championship nationally on ABC-TV.  At the time the NFL Championship was the only nationally broadcast game and in 1960 in their infinite wisdom, the NFL hierarchy even blacked out the game in the Philadelphia area because it was an Eagles home game.  Now there is a great marketing strategy – don’t allow the local fans who supported and watched the team all year to see them play in the championship game on television, the medium that catapulted the league into orbit with the 1958 overtime game.  Even Harry Wismer and Bill Veeck could figure that one out!

For whatever reason any of the bowl games existed, the one bowl game that few seem to remember (probably because it really wasn’t a real bowl game per se) was the infamous Grocery Bowl, played in Philadelphia on August 19, 1961.  Housed in Philly’s Municipal Stadium, host of the annual Army-Navy game, and in 1964 re-named JFK Stadium, the Grocery Bowl drew twice as many fans as the NFL’s Playoff Bowl.  More than 74,000 fans showed up to watch the New York Titans host the Boston Patriots in a pre-season game.  Not only were there twice as many fans at the Grocery Bowl than the NFL’s Runner-up Bowl, it also out drew the New Year’s Day Orange and Cotton Bowls and represented nearly 65% of the Titans entire 7 game home attendance at the Polo Grounds in 1960.

The game was promoted by the local Acme markets who offered shoppers a free ticket for a $10. purchase.  The south Philly location, which sat next to the Navy ship yard, is now occupied by the Eagles’ Lincoln Financial Field, the Flyers and 76ers Wells-Fargo Center and the Phillies Citizens Bank Park.  Fans at the one-time ‘Bowl’ game saw the New Yorkers hold the Patriots to only 7 completed passes, intercept 5 and in the third quarter with the home team leading 10-7, were treated to a 74 yard Al Dorow to Don Maynard touchdown pass to clinch the Titans only exhibition game victory.  With 15 seconds left in the game the Philly phaithful decided they had seen enough and stormed the end zone to tear down the goal posts, bringing the game to slightly premature end.  And contrary to popular belief, there is no truth to the rumor that the Acme shopper ticket holders stormed the field because they were (cough, cough – slight pause to clear the throat) – ‘fed up’.   As they live on today, I’m not sure that the Philadelphia area Acme markets realize that their 1961 Grocery Bowl promotion is firmly imbedded into American Football League lore.