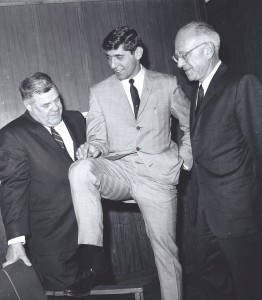 January 23, 1965 – NEW YORK: Joe Namath (right), the rookie quarterback the New York Jets paid an estimated $400,000 for, shows the Jets’ head coach, Ween Ewbank, his knee at a press conference here January 22nd.  Namath, who is troubled with a bad cartilage in the knee, is scheduled to have it operated on at Lenox Hill Hospital, January 25th