It has been a while since I sent out an update on our campaign to get Chiefs’ legend Johnny Robinson inducted into the Pro Football Hall of Fame.  We started off earlier this year with a simple petition that was placed on our website. We encourage everyone to not only sign the petition, but also to share it with your contacts lists, message boards and fans groups. We need to get this petition in front of as many eyeballs as possible:

To date we have nearly 1,200 signatures on the petition. I feel that we need a minimum of 5,000 when we turn over the results to members of the Pro Football Hall of Fame Senior Committee on August 1, so please SIGN and SHARE!

We have also been collecting quotes of support from Johnny’t teammates, opponents and football authors & historians. A few recent highlights would be:

Johnny Robinson was fantastic. There’s no doubt about it. When you watched him against the receivers on your team, and saw the respect they afforded him, you quickly understood how great a player he was. – Bob Talamini, Oilers, Raiders & Jets Guard 1960-1968

Johnny Robinson, as one of the great defensive backs in pro football history, deserves a spot in the Pro Football Hall of Fame. It’s not just because of his remarkable interception record, picking off 57 passes in 10 years as a safety, but also his uncanny intelligence as the air-traffic controller on the great Chiefs’ defense of the ’60s and early ’70s. Blessed with agility, grit, instincts and composure, he was one of the defining players of his era, justly earning his spot on the All-Time AFL team. All that’s left is his much-deserved bust next to his peers in Canton. – Michael MacCambridge, author of AMERICA’S GAME

Without reservation I highly recommend Johnny Robinson for induction into the Hall of Fame. His character and football ability are top drawer. – Harvey Frommer, Author, WHEN IT WAS JUST A GAME 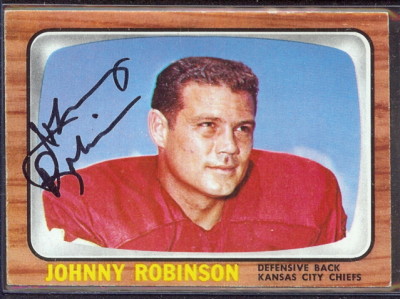 Lastly, we have been reaching out to the LSU alumni, Louisiana media, Kansas City Chiefs, Missouri media, LSU and Chiefs message boards, posting on Twitter and Facebook, and making any and all possible connections. Sadly, we lost a huge supporter recently when Billy Cannon passed away. Billy and Johnny were nearly lifelong friends, and Billy was just about to dive into the campaign when he unexpectedly passed away.

We have two months to go yet, and while we have made great strides, we still have a long way to go. If you are so inclined, please lend a hand. I can be contacted via email at todd@talesfromtheamericanfootballleague.com, and would love to receive emails of support and ideas of how to continue the campaign. It is my deepest hope that we are successful in helping to get Johnny Robinson inducted this year, and that will open the eyes of the voting committee to all of the men of the AFL who have been overlooked for so long – Arbanas, Flores, Budde, Sweeney, Tyrer, Hill, Taylor, Hennigan and on and on…

Thanks for being an AFL fan and reader of Tales from the AFL!