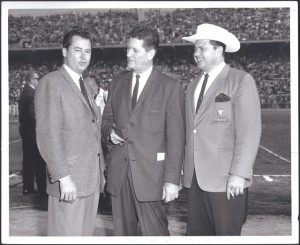 On this day in 1961, the Houston Oilers, led by the rushing of Charlie Tolar and Billy Cannon, and the passing of George Blanda, won their second consecutive American Football League championship.  The Oilers defeated the San Diego Chargers by a score of 10-3.  Though San Diego’s Jack Kemp threw for 226 yards, the Oilers secondary kept him in check by picking off four passes, and the entire Oilers defensive unit stifled the Chargers running game, holding the Bolts to just 79 net rushing yards.  In the end a George Blanda field goal and Billy Cannon touchdown were all that it took to crush the Chargers championship hopes for a second straight year. 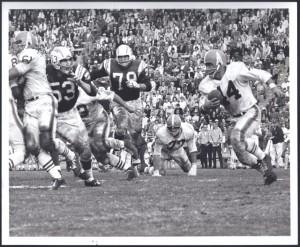 Charlie Tolar heads around end as Bob Laraba (53) is in pursuit.