Speedy Duncan discusses his Opportunity in the AFL

Speedy Duncan discusses his Opportunity in the AFL 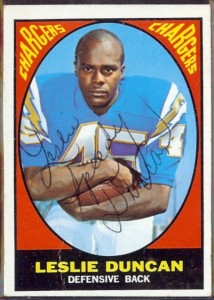 Leslie “Speedy” Duncan was one of the greatest kick returners that the game has ever known.  Duncan made his name with the San Diego Chargers of the American Football League.  Here he discusses how he made the most of the opportunities that he received in the AFL.

AFL – What benefits do you think, not monetarily, you got playing with the Chargers that you may not have gotten from playing with any other team in the AFL?

SD – I don’t know.  I never really thought about that question.  It wouldn’t have made any difference who gave me the chance, they would have gotten my best.  At that particular time I was just hungry for the opportunity.  It wouldn’t have made any difference where I went.  They still couldn’t have gotten any more out of me.  They would have got as much as I had to offer.  During that particular time I think one of the main reasons that I was still around and had the opportunity to stay around was that…  Most people will know this young man.  He’s not a young man anymore, but he was the defensive backfield coach for the Chargers, and that was Chuck Noll.  Chuck Noll recognized some of my abilities and immediately inserted me into the depth chart and started moving me up the ladder.  People got cut and people got hurt and I continued to move up.

The key at that particular time was being able to get the opportunity to show what you could do.  In college they never had me return punts.  I returned kickoffs, but I never returned punts.  As you know, that was one of my greatest abilities.  They ended up putting me in preseason, back on punt returns.  I think the first punt I touched I put it down about 60 yards up the field.  That immediately caught the eye of a lot of the coaches and stuff.  I had a real good ability.  I was what they call shifty.  I could change directions real fast, and stop on a dime and go.  That was also another asset that they were looking for.

Basically, during that time, almost all of the black colleges in the South were like the training grounds for most of the old AFL players.  The NFL basically looked over most of them.  The AFL got the chance to get those guys and if you look back at all of them in the AFL, they all came out of the South.  Buck Buchanan, Verlon Biggs, Frank Molden, Willie Richardson, Gloster Richardson.  We were all on the same ball club.  We basically played each other.  We played Grambling, Texas Southern, Southern and Prairie View.  Those areas.  Otis Taylor was a wide receiver, one of the best ever, and he came out of Prairie View.  There was a lot of talent in those colleges that the NFL, at that time, didn’t even touch.  They didn’t even go that way.  It was an opportunity for those guys to get a chance to perform on the main stage.  And when they got that opportunity, it was a different brand of football.  It was a wide-open style of football.  I think that’s one of the assets of the AFL.  By being in the AFL, you saw a different brand of football.  It was a run-and-gun type of football.  The NFL was a three downs and a cloud of dust.  Throw it on third down.  Most people liked it, but they enjoyed the way the American Football League put the ball in the air.  They came out and you had to be ready to defend.  They were going airborne on you.  At the particular time that I was with the Chargers, we had a coach by the name of Sid Gillman.  His whole thing was the run and gun.  Put it in the air.  He was a mastermind at what they now call the West Coast Offense.  The Chargers were doing that back then.  Basically it really came down.  The AFL, like I said, was a training ground and it got all the ballplayers that the NFL really didn’t want or for some reason overlooked.  It’s kind of funny.  I wasn’t even drafted.  I was a free agent, a guy begging for a chance to come in and get the opportunity to play.  Then seven years later I got traded to the Washington Redskins for three or four of the top five draft choices.  I think that was saying a lot