Steve Sabol was once on the AFL Radar

Steve Sabol was once on the AFL Radar

This article about the late NFL Films CEO Steve Sabol is from SPORT magazine, September, 1964: 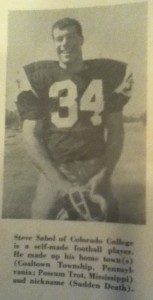 Steve Sabol belongs right up there with Novella O’Hara, John Pregenzaer, Hotso Casey and World Series press parties in making sports a great place to visit, or even live in.  We came upon Sabol in a column by Larry Merchant of Philadelphia Daily News and had to find out if he was from real life.  Sabol, it turned out, was larger than life.

He wasn’t satisfied, for example when he arrived at Colorado College as a165-pound fullback from Haverford School and Villanova, Pennsylvania.  With a background like that Sabol figured he had about as much chance of playing college football as a guy from Swarthmore had of playing pro football.

“I needed something to get people to notice me.” Steve told us this spring.  “So I said I was from Coaltown Township, Pennsylvania – everybody from western Pennsylvania is supposed to be a good football player.  I even wrote that for the Registrar.”  He chuckled.  “That sounded good and it worked.  I was fourth string until the coach looked down the roster and saw I was from Coaltown Township.  He moved me right up to second string.”

Although he wasn’t playing much, Sabol was making progress.  Until the night his father had dinner with the coach, and Jerry Carle said something about Steve doing well, but that you could count on boys from Coaltown Township doing well on a football field.  ”What?” said Ed Sabol.

“I’d warned my father,” Steve said, “but he let it slip out anyway.  The coach just laughed.  Everybody got a big laugh out of it.”  Coaltown Township had power, all right, but it didn’t have color.  What Sabol needed the next year was something a little catch, a hometown that program readers wouldn’t forget  “Possum Trot, Mississippi, sounded good,” Steve said.

It sounded great.  And now Steve Sabol of Villanova, PA., Coaltown Township, PA., and Possum Trot, Mississippi, was on his way.  All he had to do was become a good football player.  He couldn’t do a whole lot as a 165-pounder; he could do better as a 211-pounder.  “Betwee my sophomore and junior years I stayed out in Colorado and built myself up.”  Steve said.  “I sold my car to buy weights and eat, then all I did was lift weights all summer.  I just kept eating an dbuying weights.  I told my father I was working for a plumber.”

As a junior, 211-pound Steve Sabol rushed for 601 yards, averaging 4.95 yards (“I always round it off to five”) per carry, and was eighth in the country in punting.  He was also up among the leaders in nicknames – “Sudden Death” Sabol, which, of course he tagged on himself.  “I wanted people to notice me and the school.”  Steve said.  “When I went to football games as a kid the first guys I looked for were the nicknames, like Vitamin T. Smith, Crazyleges Hirsch.  My initials are S.D. so I make it into Sudden Death.  It worked.  When the publicity got out, newspapermen from all around Colorado were calling me.”

The Colorado College publicity department soon regarded Sudden Death as Sudden Wealth.  “In the beginning of last season the biggest crowd we had was about 400,” Steve said.  “By the end of the season we were drawing six or seven thousand people.  Our stadium holds 11,000.”

Besides playing football, Sabol is president of the college’s Blue Key (men’s national honor society) chapter.  He is sports editor of the school paper and writes a column called “Here’s A lot From Possum Trot.”  He also edits the football program, wherein he lists himself as “34… Sabol, Sudden D….5’10”…210…Sr….Possum Trot, Miss.”  At the beginning of last season he put an ad in the program with a picture of himself at age ten I the Haverford football uniform and the words: THE POSSUM TROT CHAMBER OF COMMERCE EXTEND ITS WISHES FOR A SUCCESSFUL SEASON TO ITS FAVORITE SON – SUDDEN DEATH SABOL.  At season’s end he substituted: CONGRATULATIONS “SUDDEN DEATH” SABOL ON A FANTASTASTIC FOOTBALL SEASON.  His stationery and envelopes have “SUDDEN DEATH” SABOL printed on them in large red letters, though he signs his name, simply, Steve.  Beneath the signature he stamps: THE FEARLESS TOT FROM POSSUM TROT.

For this season Steve has had 100 T-shirts made up with the words I am a Little Possum Trotter and a cartoon of a possum on them.  A disc jockey from near Possum Trot, Tennessee, has been in touch with him and Sabol is now trying to promote a trip to Colorado Springs for four or five native Possum trotters to cheer him on.  “I can say they’re my grandparents or something,” he said.

He feels they’ll have plenty to cheer about.  “We were 4-6 last year but we only lost one guy so we should have a good team.  I know all the other teams will be out to blast me.  I started a little last year when the publicity came out.  They’d say, ‘Get that Sudden Death!’ that’s all right because I usually play better.”

He hopes to play pro ball eventually, but if not will probably work with his father, who takes the official NFL films, “I’ve heard from four or five pro teams,” Steve says, “mostly from the AFL, questionnaires and a couple of feeler letters.”  He said the only NFL team he’d heard from was the Vikings who said, “We’ve been following your career with amusement…”