The Collection that Got Me Writing

Home/AFL, American Football League/The Collection that Got Me Writing
Previous Next

The Collection that Got Me Writing 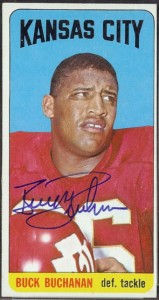 One of the initial reasons that I began writing this blog was that I wanted an outlet for sharing my collection of autographed AFL trading cards.  My collection began several years ago, when I purchased a lot of autographed San Diego-related baseball and football memorabilia from the 1960s, that included a partially autographed 1963 Fleer football set.  I immediately fell in love with that set, and it soon became evident to me that completing it (and eventually the other AFL sets) in autographed form would be the focus of my collections for the forseeable future.

The process of building that collection has brought me closer to the AFL that I would have imagined.  In purchasing raw cards, tracking down former players, writing letters and looking for previously signed cards, I was forced to learn about the athletes featured on these little pieces of cardboard.  Where did they grow up?  Where did they attend college?  How long was their career?  What did they do after retiring from the game?  Are they still living, or did they pass away at an early age?  I asked all of these questions, and many more, to glean information on a great many of the players featured in this collection.  And like any meaningful hobby, this collection has brought me joy.  It has been a source of frustration.  At times it has provided some mental challenge, and though I have yet to actually complete a set, it has given me a sense of accomplishment to get as far along as I have.

Last night I finished uploading the regular issue sets into a new gallery titled Autographed AFL Trading Card Sets.  I encourage you to spend some time looking through the gallery.  Take a look at the 1963 Fleer set, my favorite of all.  Then check out 1965 Topps, which has the Joe Namath rookie card.  Maybe jump over to the 1960 Fleer set, which was released so early in the season that nearly a third of the players featured had been cut by the time the cards were released, and thus never actually played in an AFL game.  There are interesting cards, photos, and stories throughout the gallery.

It is my hope that the gallery will serve multiple purposes.  For AFL fans, I hope that viewing the cards brings back memories of childhood, purchasing packs of trading cards from your neighborhood market, and perhaps getting them signed while attending a game.  For collectors, I would like the scanned cards to serve as autograph exemplars that people can refer to before purchasing autographed items of their own.  For former players I hope that his collection proves that their efforts on a football field some 50 years ago have not been forgotten, and still draw the admiration and respect of fans to this day.  For me, it allows me to show off a bit, and share something that I enjoy very much, with people across the country.

So grab a cool drink, maybe a bag of chips, and take a look at some cards.  I think that you will find it to be time well-spent.