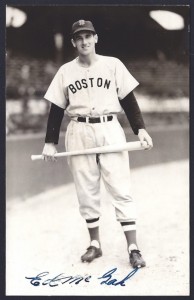 Quick…  Name the former Boston Red Sox player who was an original minority owner of an American Football League team.  Dom DiMaggio, you say?  Very good.  DiMaggio, a star centerfielder for the Boston Red Sox from 1940-1953, did have a partial stake in the Patriots when the league kicked off in 1960.  However, there is another man with whom DiMaggio shares such credentials.  His name was Ed McGah, and he was a longtime partial owner of the Oakland Raiders.

Born in Oakland, California, in 1921, Ed McGah made his major league debut with the Boston Red Sox in 1946.  Ironically, the reserve catcher was a teammate of Dom DiMaggio’s at the time.  McGah played in just 24 games for the Sox in 1946 & 1947, before being sent back down to the minor leagues.  He never made it back to the big leagues, and retired with a .157 batting average in just 51 career at-bats.

After baseball, McGah moved back to Oakland and became a successful contractor and land developer.  In 1960, he and his father joined a group of men led by Wayne Valley, in securing an American Football League franchise for the City of Oakland.

Ed McGah was a partial owner of the Raiders from 1960 through his death in 2002, and was a key figure in the hiring, and rise-to-power of a young Al Davis.  Though exact numbers have never been made public, it is believed that McGah owned roughly 30% of the Oakland Raiders franchise at the time of his death, second only to Al Davis, who is believed to have owned 37%.