The One Non-AFL AFL Card

The One Non-AFL AFL Card 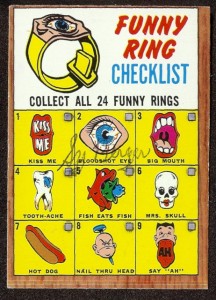 As a collector of autographed card sets, I track down former players in the hopes that they will affix their signature to old bubble gum cards that I can add to my collection.  With the majority of these sets, the challenge comes in locating each particular athlete that is featured in the set.  Some are easily found, while others can be much more difficult.  However, there are a few cases when the issue is not finding a particular athlete to sign a card, but rather deciding which athlete should sign.  In this instance I am talking about checklist cards.  You recall them.  They were the cards that caused you to groan when you got one in a pack.  They are simply cards listing the names of all of the players in the set.  Typically pretty boring stuff.  Some collectors don’t bother to get their checklists signed, but I am just OCD-enough that leaving them blank would be like scratching fingernails down a chalkboard.  I usually have my checklists signed by the 20 players that lasted all 10 seasons of the AFL.

There is, however, one card that was produced in the 1960s, that has absolutely nothing to do with the AFL.  In fact, it has nothing to do with football at all.  That card is the 1966 Topps Funny Ring Checklist.  Back in ’66, Topps inserted these odd little cardboard rings into their packs of cards.  The rings were printed onto card-sized piece of perforated cardboard, and could be punched out, rolled and worn.  They had goofy themes, like a nail through the head and equally corny stuff.  The odd thing about these rings though, was that Topps actually made a checklist card for them, and made card a numbered part of the 1966 Topps AFL set.  The common belief is that the checklists were unpopular with kids in 1966, and most were thrown away.  Therefor, that card is particularly difficult to find in decent condition.

Finding a PSA 9 Funny Ring Checklist was not a concern of mine, thankfully.  But to complete my signed 1966 Topps set, I needed to come up with a person to sign this card.  I ran through a mental checklist of top AFL names.  Lamar Hunt and Joe Foss had already passed away, as had most of the other league commissioners, Milt Woodard and Pete Rozelle.  Al Davis was still alive at that point, but getting Davis to sign was next to impossible.  I didn’t think that it made sense to have any player sign the card.  I was really stumped until a couple of friends came to my aid.  First, fellow collector John Bennett, suggested that I have Sy Berger sign the card.  While Berger had no real AFL affiliation, he worked at Topps from 1947-1997, and was in charge of the company when the Funny Ring Checklist was produced in 1966.  Then I tapped Jim Steeg, a fellow collector, NFL executive, and friend of Berger’s.  Jim got a chuckle out of my request (as did Berger, according to Steeg), but he sent the card out.  A week-or-so later, Jim had my card back, signed on both the front and back by Berger.

I am guessing that the card is unique.  Yes, it is kind of silly, but it is a cool piece recognizing a man who was instrumental in bringing joy to millions of kids over the years, as the head of Topps.