The Team Most Overlooked by the HOF is…

The Team Most Overlooked by the HOF is…

We ran a survey last week to see which original AFL team Tales readers felt the Pro Football Hall of Fame had most overlooked. Basically, which team had the most players that still deserved to be inducted? A total of 236 voters were cast during the week and the results follow:

Tales readers overwhelmingly feel that the Dallas Texans/Kansas City Chiefs are the team that has been most-overlooked by the Pro Football Hall of Fame. Truthfully, the vote wasn’t even close. That is a very interesting conclusion when you take into account that the Chiefs also happen to be the AFL team that has THE MOST members already enshrined in the Hall of Fame. There are a total of 10 AFL Chiefs in the HOF, with Bobby Bell, Buck Buchanan, Curley Culp, Len Dawson, Willie Lanier, Johnny Robinson, Jan Stenerud and Emmitt Thomas, with head coach Hank Stram and owner Lamar Hunt. Still, those Chiefs teams were an incredibly talented bunch who won three AFL championships and Super Bowl IV.

I looked at the Texans./Chiefs rosters from 1960-1969 and here are the names that I found that I believe still deserve serious Hall of Fame consideration: 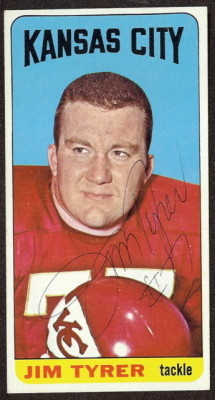 That’s an incredible list of players to be OVERLOOKED from a single team. The All-Star appearances and Pro Bowl selections are impressive, but don’t even take into account the intangibles. Otis Taylor is considered the prototype of the big, strong receivers and someone who was nearly unstoppable. E.J. Holub was a team leader and is still the only player to start on offense and defense in more than one Super Bowl. Fred Arbanas was the best tight end in the AFL despite the use of only one eye.

How many will actually be inducted into the Pro Football Hall of Fame?  Some think the 1960 Chiefs are already have too many representatives in the HOF. The statement is rather short-sighted and penalizes great teams for doing the things necessary to be great. If a player has a HOF-worthy career, he should be inducted regardless of his teammates that have previously been recognized.

The truth is that most of these men will likely never get their just recognition, at least not while they are still alive to enjoy the honor. Jim Tyrer, perhaps the most deserving of the bunch, is overlooked because of the way that he died. With what we are now learning about CTE and football-related brain injuries, his case should be readdressed. Otis Taylor has long suffered from Parkinson’s Disease. Dave Grayson, E.J. Holub, Jerry Mays and Jerrell Wilson have already passed away, leaving just Arbanas, Budde, Burford and Haynes still with us.

While the Hall of Fame’s expanded induction class for 2020 is a nice idea, it wouldn’t cover the number of deserving AFL players EVEN IF PLAYERS FROM ANOTHER 70+ YEARS OF FOOTBALL HISTORY WEREN’T ALSO INCLUDED IN THE VOTE. As things currently stand, the AFL will never get the recognition it truly deserves.