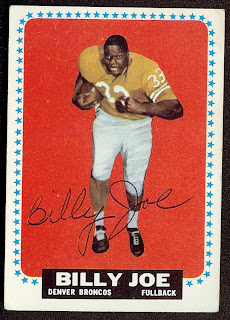 The Denver Broncos had been mired in the depths of the standings in each of their first three AFL seasons.  After finishing just 7-7 in 1962, the Broncos were looking to fill a need for a strong running back when they used their 11th round pick in the 1963 AFL Draft on a 6’2″, 235-lb. running back from Villanova named Billy Joe.
Billy Joe and veteran receiver, Lionel Taylor, were the Broncos main offensive weapons in 1963.  From the Broncos backfield, Joe had 646 yards on 154 carries for a 4.2 average, and four rushing touchdowns.  He also had 15 receptions for 90 yards and a touchdown catch.  At the end of the season, Joe edged out the Chargers defensive back, Dick Westmoreland, as the AFL Rookie of the Year.
Despite the addition of Billy Joe to their offense, the Broncos put together a dismal 2-11-1 record in 1963.  Joe’s second season in Denver ended with an identical 2-11-1 record, and in early 1965 he was traded to the Buffalo Bills for enigmatic running back, Cookie Gilchrist.  Joe spent a single season in Buffalo, rushing for 377 yards, four touchdowns, and helping Buffalo to their second-consecutive AFL championship.
Billy Joe was picked up by Miami in the 1966 expansion draft, and played for the Dolphins in their inaugural season.  From there he went to New York and played the final three AFL seasons with the Jets.  He retired in 1969 with 2,010 career rushing yards and 589 receiving yards and 19 total touchdowns.
Billy Joe moved into coaching after his playing days had ended.  He had 33 seasons as an NCAA head coach, spending most of his time with historically black colleges.  He retired in 2010, with a career record of 243-133-2.  His number of victories are second only to Eddie Robinson among coaches at historically black colleges and universities.
By Todd Tobias|2012-04-03T14:23:00-07:00April 3rd, 2012|AFL, American Football League, Billy Joe, Cookie Gilchrist, Denver Broncos|3 Comments