The San Diego Chargers and the Buffalo Bills faced each other in the 1965 AFL Championship Game.The Bills were led on offense by their quarterback, Jack Kemp, whom they had won away from the Chargers for a $100 waiver fee in a rare Sid Gillman snafu in 1962.  The Chargers had several star players implementing Coach Gillman’s space aged offense, but their running game was dominated by a silky-smooth back from Oregon State by way of Compton Community College, named Paul Lowe.  Kemp and Lowe, one time teammates, shared the league’s most valuable player honors in 1965. 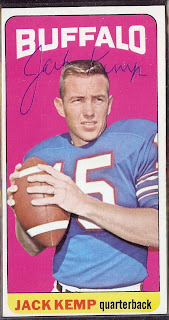 Jack Kemp did not produce awe-inspiring statistics in 1965.  In fact, the only offensive category in which he led the league was fumbles (9).  Still, his workman-like numbers (179-for-391 passing, 2,368 yards and 10 touchdowns) and superior leadership was enough to guide the Buffalo Bills to their second-consecutive AFL championship with a 23-0 victory over a very talented Chargers team.  The Associated Press selected Jack Kemp as their 1965 American Football League Most Valuable Player. 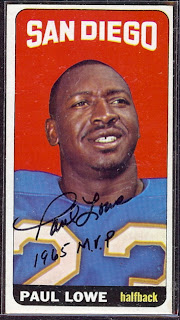 The San Diego Chargers reached their fifth-and-final AFL Championship Game in 1965, with an offense that featured two top running backs, the punishing Keith Lincoln and the elegant Paul Lowe.  Starring in an offense known for its passing attack, Lowe became the first runner in league history to top 1,000 rushing yards in a season when he led the AFL in rushing yards (1,121), average (5.0 yards-per-carry) and touchdowns (6).  He hauled in 17 receptions for 126 yards and another score.  When post-season honors were announced, both the United Press International and The Sporting News had selected Paul Lowe as their Most Valuable Player.
By Todd Tobias|2012-04-19T13:44:00-07:00April 19th, 2012|AFL, American Football League, Buffalo Bills, Jack Kemp, Paul Lowe, San Diego Chargers|27 Comments