One of the things that I enjoy most about studying history is when after spending time on research, you stumble upon a bit of information that clearly illustrates a situation from years ago.  I had just such an occasion the other day when I was looking for information about a piece of AFL memorabilia.

I recently helped a friend and fellow collector sort through some old boxes of game programs, photos and other memorabilia.  It was dirty, sweaty work, but still kind of enjoyable because you never knew what might turn up in the next box.  At one point during the day, I spotted a beautiful New York Titans pennant laying on a stack of boxes  Knowing how much I love the AFL, my friend gave the pennant to me as a “thank you” for the use of my strong back and big truck.

Later that evening, I went online to try to learn a bit about the pennant.  What year was it made?  How rare is it?  Where was it sold? And on and on…  Ebay can be a great source of information because of the quantity of material that is continually listed for sale.  I ran a search for “new york titans pennant,” and while I did not find the pennant that I had been given, I found two similar listings for another style of Titans pennant, one that is apparently more common, with dark blue felt, gold lettering, and a football figure on the left side.  I had seen this type of pennant before, but for some reason, in both of the eBay listings, the pennant had been cut in half horizontally.  It seemed odd to me that both pennants would suffer from the identical damage, so I read the auction listings and found what I considered to be an interesting bit of information.

According to both auction listings, these pennants had originally been printed for the New York Titans.  The Titans essentially went bankrupt in 1962, before famed New York talent agent, Sonny Werblin, purchased the team and changed its name to the Jets.  Unfortunately the team concessionaire still had a quantity of this particular style of Titans pennant in stock when the name was changed.  Rather than destroy or throw away the remaining stock, then pennants were cut in half, removing the “Titans” and bottom half of the football player.  A close look at the stitching shows that this changes were factory-made, and the vertical gold stripe was added to the pennant after the cut was made.  Though the old pennants did not match the Jets new green and white uniforms, it was determined that selling a “New York” football pennant was preferable to incurring the cost of printing brand new pennants. 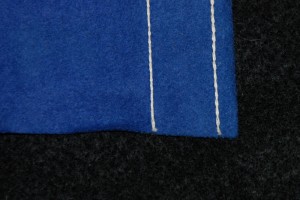 I found this fascinating, and it illustrated a couple of points for me.  First, it made me realize just how far the original AFL teams have come, especially when compared to the image-conscious modern NFL.  Can you imagine walking into a stadium souvenir shop and finding that your option in pennants was last year’s model, with the old team colors and logo, cut in half?  And secondly, that the team (or possibly souvenir manufacturer) was on such shaky financial ground that this pennant modification was even considered as a feasible option.  The financial situation in modern professional football is truly light years away from the meager beginnings of the AFL.

The two pennants were being sold in different formats on eBay.  The first was a fixed price listing, asking $700 for the pennant.  I opted for the second listing which was a standard auction, and won the pennant for the opening bid of $9.99 plus shipping.  So now I have one-and-a-half New York Titans pennants.  One with a great story, and another that I am still trying to learn about.