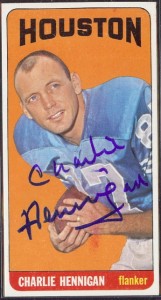 Today’s comparison is between Charlie Hennigan of the Houston Oilers and two HoF receivers, Raymond Berry and Bob Hayes.

Like another early AFL receiver, Lionel Taylor, Charlie Hennigan’s HoF chances are automatically dulled by voters because he played in the early days of the AFL, and HoF voters seem to discount accomplishments during these seasons based on a belief that AFL defenses were inferior competition.  Regardless, Hennigan competed at levels well-above most other AFL receivers.  In fact, he was among the elite receivers of the early AFL, which in my estimation includes Hennigan, Lionel Taylor, Don Maynard and Art Powell.   In fairness, Hennigan’s career was relatively short, having played just seven seasons, but HoF inductees who played fewer than 10 seasons are not unheard of.  League champion, league leader, all-league player, record-holder…  Thoughts?