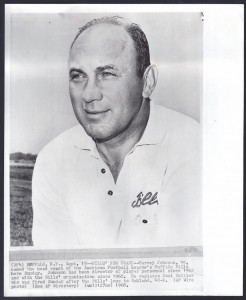 BUFFALO, N.Y., Sept. 15 — BILLS’ NEW COACH — Harvey Johnson, 49, named the head coach of the American Football League’s Buffalo Bills here Sunday.  Johnson has been director of player personnel since 1962 and with the Bills’ organization since 1960.  He replaces Joel collier who was fired Sunday after the Bills’ loss to Oakland, 48-6.  (AP Wire photo) 1968