Today’s comparison is between Gino Cappelletti of the Boston Patriots, and two HoF wide receivers, Raymond Berry and Tommy McDonald. 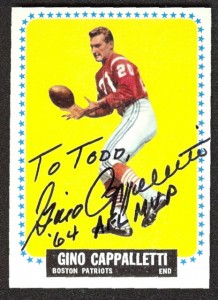 Individually, Gino Cappelletti was an excellent receiver and an excellent kicker.  Perhaps not either position alone is enough to get him into the Pro Football Hall of Fame.  However, viewed together, as a single body of work, Cappelletti’s success in professional football should be enough to warrant strong HoF consideration.  Cappelletti was the model of consistency and durability, having missed only one game in his career, and that is his final season.  Cappelletti was perhaps not as flashy as an Alworth, Powell or Maynard, and played in a small market, but that should not be held against him when his success is so apparent.