Today’s comparison is between Lionel Taylor of the Denver Broncos/Houston Oilers and two HoF receivers, Raymond Berry and Bob Hayes. 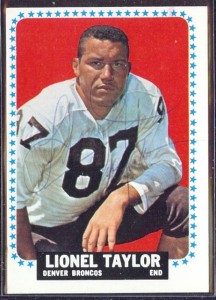 Lionel Thomas Taylor – Drafted in 1959 by Chicago Bears, spent rookie season as a linebacker in the NFL…Went to the Broncos in 1960, and caught 92 passes for 1,235 yards and 12 touchdowns…Led AFL in receptions in four-of-eight seasons…Retired after nine seasons with 567 receptions for 7,195 yards and 45 touchdowns…Four-time AFL All-Star, three-time Broncos MVP, twice All-AFL…First professional receiver to log more than 100 receptions in a season (1961)… AFL All-Time Second Team member

I believe that Lionel Taylor’s hall of fame chances are lowered by two issues, neither of which we his fault.  First of all, he played in the early days of the AFL, and HoF voters seem to discount accomplishments during these seasons based on a belief that AFL defenses were inferior competition.  Secondly, he played on Broncos teams that consistently found themselves near the bottom of the league standings.  For many years Taylor was the Broncos go-to man, and he performed admirably, despite having to catch balls from a quarterback carousel.  He has nearly 200 more career receptions than Hayes, though he played two fewer seasons.  Imagine Taylor over 13 seasons with Unitas as his quarterback, and whose numbers would be better, his or Raymond Berry’s?  Thoughts?