As I write new articles, I try to mix things up a bit so that I don’t post too many articles of any one team in a short period.  Usually I am pretty good about this, but we’ve had several Chargers pieces recently, and I am now adding another.  Mea culpa, mea culpa, I will get better…  That said, I was very fortunate to add a truly unique piece to my memorabilia collections recently, and I thought that you all might enjoy seeing it. 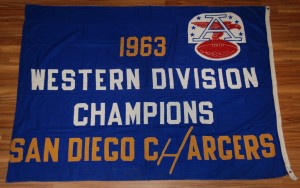 This banner came to me through the generosity of a friend who was told that it used to hang at Balboa Stadium.  The banner is double-sided, and measures 90″ x 65″.  It is made of canvas, and has obviously seen some wear over the years.  I was absolutely thrilled to acquire it, and quickly began attempting to photo-match it from the images in my collections.

Assuming that the banner was not moved from Balboa Stadium to San Diego Stadium when the Chargers moved in 1967, the window in which it could have been on display was only from 1964-1966.  Flipping though my photos, I came across this image of the Chargers knight mascot, standing in front of the columns at the western end of the stadium on September 4, 1966. 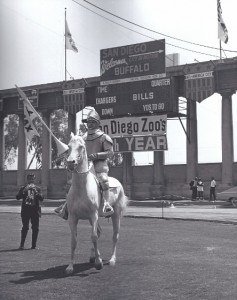 If you look closely in the top-left corner of the image, you will see what I believe is the banner.  It is partially obscured by the knight’s lance. 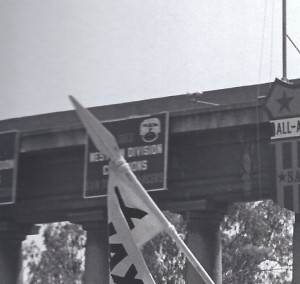 It appears to me that when the banner was taken down,  3/4 of the white border were trimmed away.  One side was left, and perhaps the banner was used as a flag or some sort of drape afterwards.  I say this because if you look in the first photo, you will see that the white border runs a bit beyond the height of the actual banner, roughly a border-width difference.  The other possibility, of course, is that there were multiple identical banners made and used in different areas of the stadium.  Either way I am excited to have it, and pleased to know that there is one more piece of AFL history that somehow escaped the rubbish bin years ago.