A Study in Chargers Pennants

A Study in Chargers Pennants

I meet a lot of interesting people in my American Football League studies.  One such person is AFL Chargers uber-collector, Pete Lowry.  Pete and I became fiends about 10 years ago, and have been bouncing Chargers questions off each other ever since.  Pete took some time recently to share his AFL Chargers pennant collection with us.

I never really set out to collect Chargers AFL pennants, it just kind of happened while collecting all their other memorabilia from that time period.  Eventually, I decided that I would get every possible one made somehow.  There is only one full size pennant that eludes me to this day.  I will get to that later.  There may be another that I don’t have that I have never seen before. If anyone out there knows of one that I don’t have, I would love to see a picture of it…and make you an offer!

I will start with the Los Angeles Chargers pennants.  Since they only existed for one year (1960), they are hard to come by and not cheap.

The pennant pictured below is, I believe, the earliest LA pennant.  I purchased this from someone whose brother went to Chapman College in Orange, CA in 1960.  The Chargers held training camp there that year.  He had never been to San Diego and never attended a game.  The gold outline on the blue bolt is exactly how the LA Chargers looked and is drawn here to emulate it.  This is the only example of this pennant I have ever seen.

The two pennants pictured below are identical except that one of them has some white letters and white bolt.  The white letter version is much rarer than the all yellow.  Still, either variety is very popular with collectors.

The second one pictured has a San Diego version (where the shield has no letters).  I have seen it once and it was in horrible shape so I passed on it.  It’s the only 1960’s Chargers pennant I don’t own (that I know of).

The two pennants pictured below are very similar with only the slightest of differences.  One of them is made of stiff felt.  The other one is about 2 inches shorter and made of soft, floppy felt.  The letters appear to be less sharp on the floppy pennant but then again, maybe that’s due to the material it’s printed on.  I suppose it’s also possible that the floppy version shrunk over time.  I just don’t know.

The pennant pictured below is made of stiff felt.  From what I understand, this version was ordered through magazines.  The man who sold me this was living in Baltimore as a kid and ordered this through a sports magazine he had.  This one is very rare.  The descendants of this pennant (the SD variety) are common.

The pennants pictured below are somewhat of a mystery.  They both have “LA” in the shield and “San Diego” above “Chargers”.  No one has ever told me the exact reason these pennants were created. I can only speculate as to why they exist so here goes:  The AFL in the early days lost lots of money.  I imagine that in an effort to save money and to perhaps retain some of their LA market, they made these soon after their move to San Diego.  Some have said that the overstock of LA pennants were used to make these.  Not sure how that works since removing “Los Angeles” and putting “San Diego” would hardly be cost-efficient…or would it?  Anyone out there have any knowledge of these? 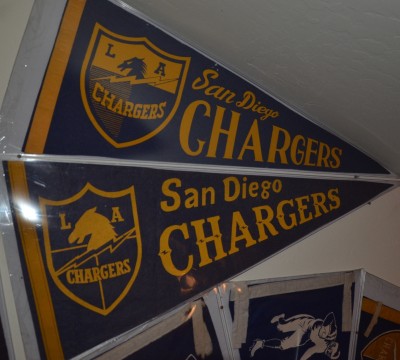 There is also a mini version of this that I have only seen in period photographs. 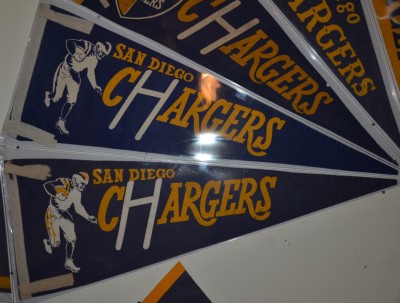 The next one pictured below is the only one I’ve ever seen.  It has “San Diego” written out in full in the shield.  I am guessing it’s from 1961 as the font style of “Chargers” is the same as the previous.

The two pictured below were probably made for a few years, from 1961 to I would guess the mid-60’s.  The blue variety appears to be fairly common.  That could be because someone found a small horde of them boxed away and has put them on the market.  The yellow variety is much harder to come by. 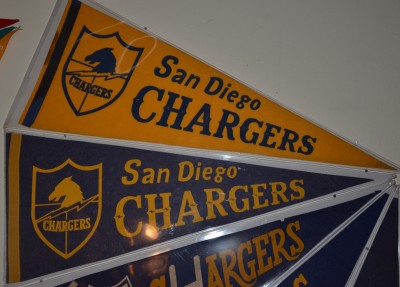 The three mini-pennants below I would say were made around 1965.  I have the Atlanta Falcons (1965) version but I have never seen a Miami Dolphins (1966)or Cincinnati Bengals (1968) version.  Seeing those teams would have given me further clue as to their age.  Those pennants might exist but I haven’t seen them. Any reader help on these would be greatly appreciated. 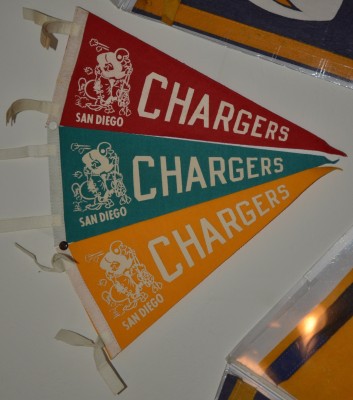 The pennant pictured below is nearly identical to the 1962 – 1966.  This version is made of very thin but tight fabric with a stitched edge all the way around.  This also has the original stick.  This one is not unique to the Chargers as I have seen the Boston Patriots version.  This is the finest quality pennant I own. 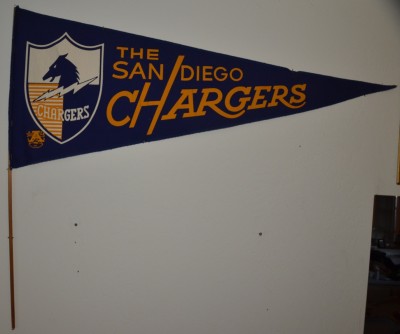 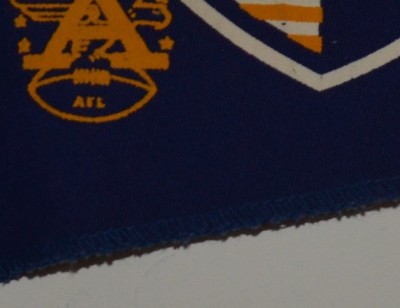 1962 – 1966.  The pennant pictured below was sold in Charger programs during these years so there is no great mystery about them.  A very stylish pennant.  I believe this is the first time the AFL logo appears on a Chargers pennant.

Below is the pennant sold from 1967-1969.  These were also sold in Charger programs.

Below are pictured the Canteen pennant and its near replica without the Canteen logo.  I assume these are from the 1960’s as they have single bar facemasks.  They are no earlier than 1968 as the Broncos version has the big “D” on it.  The pennant without the Canteen Corp on it has blue tassels. 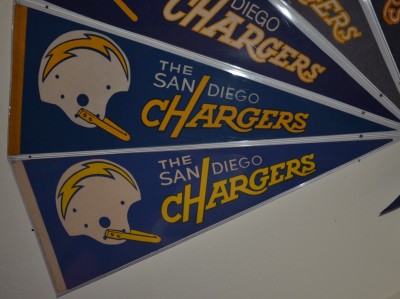 I have several AFL and early 1970’s mini-pennants too. 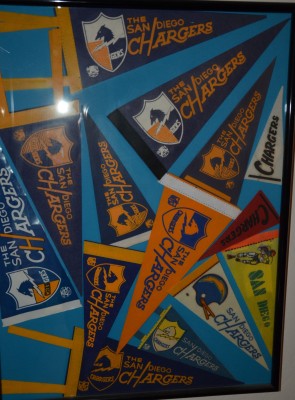 The one below could be from the 1960’s or 70’s. I don’t have any info on it.  I have seen pennants in the past make goofy fun of the team name involved and usually has a cartoon character pictured.  Maybe this has nothing to do with the San Diego Chargers.

I was no more than a toddler in the 1960’s so I can only describe here my observations and word of mouth.  If there is anyone out there that can add information or provide examples of pennant varieties not seen here, please let me know.  Thanks!