The more that I learn about him, the more I become fascinated with Cookie Gilchrist.  There was just so much life packed into his 70+ years.  Not all good, and not all bad, Cookie seemingly lived life at a pace that far outstrips the majority of people.  It is so unfortunate that CTE began to rob him of his mental faculties in the 1970s, some 40 years before his death.  There is no telling what the man may have accomplished. 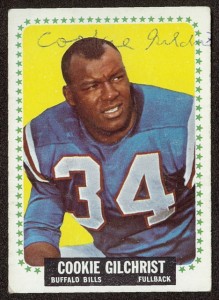 In this piece, guest blogger, Dave Steidel, takes a look at Cookie’s off-the-field business ventures.  As would be expected from Cookie Gilchrist, some of them make you shake your head and just say, “Wow!”

Oh, and as an AFL fan and collector, I would LOVE to own a pair of Cookie Gilchrist Signature Ear Muffs.  I wonder what happened to all of them?

From high school to the Cleveland Browns, Canadian Football League, Buffalo, Denver and Miami, Carlton Chester Gilchrist was a force in football and the entrepreneurial world.  Once described as a mixture of Horatio Alger, Abercrombie & Fitch, Peck’s Bad Boy, Huckleberry Finn, the Lone Ranger and Captain Marvel, Cookie may also have been the first professional athlete to conger up his own form of Twitter light years ahead of its time.

At one time or another Gilchrist had sought to invest in a sporting goods store called “Cookie’s Closet, become a public relations specialist and a mining prospector in northern Ontario.  He was so excited about the latter that he hired an Indian guide, rented a helicopter and flew over the lake where a large body of copper ore was discovered, dropped on pontoons into the water and staked his claim.  He also tried to get Bills owner, Ralph Wilson to invest in 20,000 pairs of autographed Cookie Gilchrist earmuffs to sell at the 1964 AFL championship game.  Wilson declined the offer.  It was also reported that Cookie sold Christmas trees outside of the Bills War Memorial Stadium.

Traded after the 1964 season to Denver, Gilchrist asked the Broncos to let him have a telephone in his room at training camp so he could stay in touch with his many business endeavors.  His request was refused, so Cookie had a phone installed in his car and hooked into his horn under the hood.  He then parked his car under his dorm room window.  Players claim they heard Cookie jump out of bed at all hours of the night and then run outside to answer the horn.

While making his mark on pro-football as the AFL’s best fullback, Cookie also proved that he had a wide range of business talent as well as being a man with a vision.