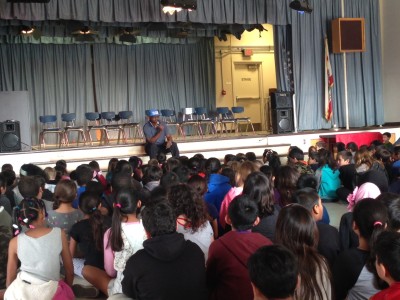 This month marks the 50th anniversary of the boycott of the 1965 AFL All-Star Game in New Orleans.  Several articles were written about the event, and while I did not see any of the boycotters interviewed, it was heartening to know that their efforts were not forgotten. 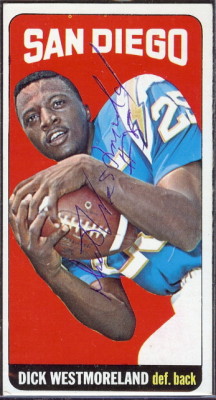 One of the men who participated in that boycott is former Chargers and Dolphins defensive back, Dick Westmoreland.  “West,” as his friends call him, lives in San Diego, and still looks like he could run onto the grass and give Hell to modern receivers.  But regardless of how good he looks, West is a link to times past, to an important part of our history.

As such, I took him to visit an elementary school this week.  San Altos Elementary School, in Lemon Grove, CA, held a Martin Luther King, Jr. Celebration on Tuesday.  After the school gathered in the auditorium, a group of second graders put on a readers theater.   Mr. Spears, the school custodian (who happened to be West’s friend and former martial arts instructor) recited Dr. King’s “I Have a Dream” speech.  Dick Westmoreland spoke about going to college in North Carolina, sit-ins at local lunch counters, marches on campus, and the boycott in New Orleans.

It was interesting to see the children’s reactions to his talk.  San Altos is an ethnically diverse school, and once the students got over the excitement of having a former Chargers player on campus, they listened to what West had to say, and responded with good, thoughtful questions.  One little African-American girl stood up and asked, “Why were people so mean back then?”  Her innocence was sweet, and gave me hope that she has never been mistreated because of the color of her skin.  Perhaps things are a bit better than we have seen in the news lately, at least in Southern California.

West’s message was well-received, and he got to talk a bit of football as well.  One young boy got quite a reaction when he stood up and asked, “Were the Raiders really bad back when you played, too?”  In all, it was a great way to help bring history and a bit of fun to nearly 250 school kids.  Afterwards, West was mobbed for photos and autographs, and the children went away with a signature, a smile, and a better understanding of history. 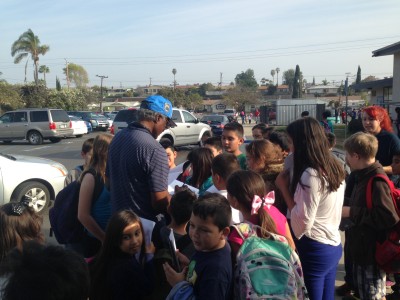 West signed autographs for 20 minutes after his presentation.