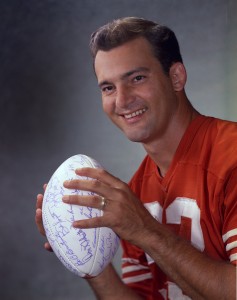 One of the great names and early stars of the American Football League was Denver Broncos defensive back, Austin “Goose” Gonsoulin.  The Goose began his professional career with a bang, leading the AFL with 11 interceptions in 1960.  He was a three-time AFL All-Star, and left the league in 1966 as the AFL’s all-time interceptions leader with 43.  He is a charter member of the Broncos Ring of Fame, and a member of the AFL’s All-Time Second Team.

The fans were hungry for pro sports in Denver, and football fit them well.  It got off to a slow start, especially when after the first extra point was kicked in Denver, the general manager went into the stands and took the ball away from the fan (that caught it).  But Denver always had the best fans, and still do.  They have always treated me great, and still remember me.  At least the older ones do, and the new fans still show me a lot of respect by voting for me on the records I still have.  My name in the stands (Ring of Fame) is just super.  Owner Pat Bowlen, when he took over, he got us all together and started the Ring of Fame.

I was there at the 1960 training camp, and I was the last to leave from camp in 1966.  I went on to the NFL’s 49ers.  In the last game we played the Cowboys.  The 49ers would not let me come back the next season because I was hurt in the first few games (my first season with them), even though I played a lot of game after my injury.

I was the first guy to intercept a pass in the AFL, and seven years later I was still the interception leader.  The fans, players, and coaches really gave my life meaning, and still do today.