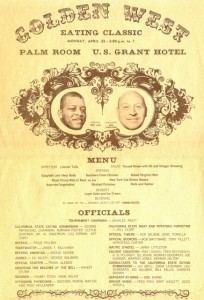 At 6’9″ and somewhere around 325 lbs, it should not be a surprise to anyone that Ernie Ladd knew his way around the dinner table.  A San Diego Chargers press release from 1961 discusses Ladd dining with Larry Fox of the World Telegram, and mentions Big Ernie’s consumption for the meal, which consisted of two shrimp cocktails, three dishes of cole slaw, three servings of spinach, three baked potatoes, eight rolls with butter, a half-gallon of milk, four 16-ounce steaks and three exotic desserts.  The bean counters at the World-Telegram undoubtedly raised a few eyebrows when Larry Fox turned in that receipt for reimbursement. 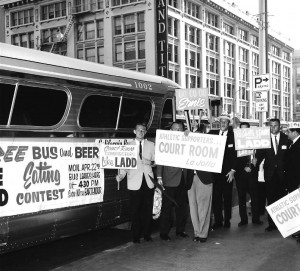 Teammates and fans gather to cheer on Ernie Ladd.

The most well-publicized of Ernie Ladd’s gastronomic events was when the big man participated in the Golden West Eating Classic on April 22, 1961, at the U.S. Grant Hotel in downtown San Diego.  The gorge-fest, in which Ladd competed against local tuna fisherman, Nick Cordileone, brought out some 1,800 spectators, and some of San Diego’s most celebrated citizens, many of whom held “positions of authority” for the contest.  Among those involved were:

The menu for the evening was specific, and consisted of lobster tails, tossed green salad with oil & vinegar dressing, spaghetti & meatballs, Southern fried chicken, baked Virginia ham, roast prime ribs of beef with au jus, New York cut sirloin steaks, assorted vegetables, mashed potatoes, rolls and butter , and a layer cake with ice cream was served for dessert.  Hamburgers were to be employed in the event of a sudden death eat-off. 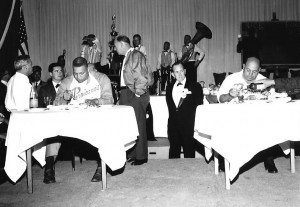 Ladd and Cordileone get down to business.

The starting bell rang, and the two gargantuans tucked in, their forks flying with ferocity.  Cordileone kept pace with the gridiron giant in the beginning, but Ladd slowly pulled ahead, and maintained the lead through the end.  Some say that Cordileone ultimately lost because he failed to eat the skins of his chicken.  But Big Ernie led folks to believe that the fisherman just couldn’t keep up with the gridiron star.

Ladd recalled in a Tuscaloosa News article from 1965, in the , “I agreed to meet him on his own ground, which was Italian style.  He started fast as we went through a two-pound salad, a platter of meatballs and spaghetti, two stuffed lobsters, a  three-pound steak, a four-pound prime rib, half a dozen hamburgers, and two whole chickens.  He began slowing down.  I knocked off two plates of rolls and butter, a quart of ice cream and cake, and he was finished.” 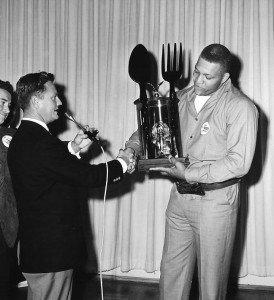