We have all long-lamented the fact that Johnny Robinson is still not in the Pro Football Hall of Fame.  I have written an article about the situation that was posted tot he Kansas City Chiefs website (Why is Johnny Robinson not in the Hall of Fame?), and put together a Hall of Fame Comparison for good measure.  Sadly, my meager efforts have joined the throngs of others that appear to have fallen on deaf ears over the decades.

Still, I have heard recently that Rick Gosselin, a Dallas Morning News columnist and member of the Pro Football Hall of Fame Veteran’s Committee, is a fan of Robinson’s.  Though I do not count myself among the legions of Twitterati, I have played around with the social media site.  I started following Gosselin, and sent him a link to my story.  The following is our short Twitter conversation: 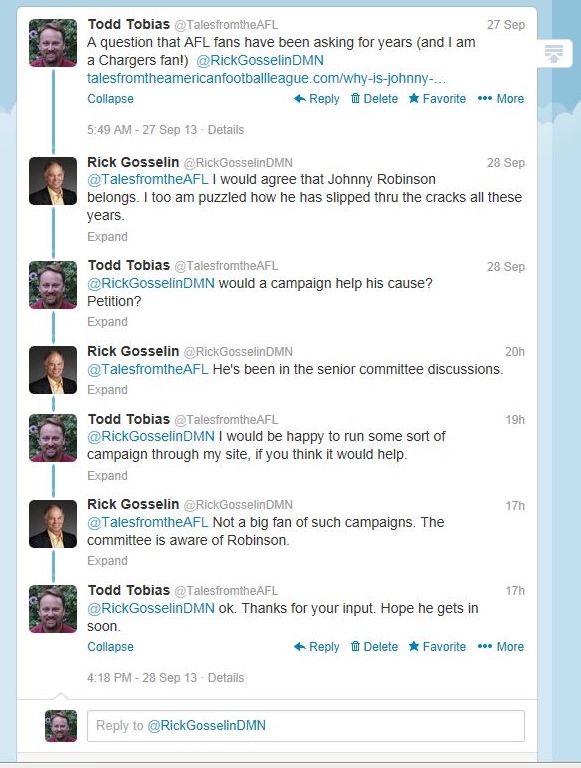 I would be happy to help mount some sort of campaign for Robinson through the Tales site, but as I have been told by a few people, those campaigns can sometimes do more bad than good.  At least it appears that Johnny Robinson has a fan in his corner.  We can only hope that Gosselin, who has worked previously in Kansas City, is able to help Johnny Robinson receive the credit that he so richly deserves, and is so long overdue him.  Still, it baffles me that a guy like Robinson cannot get enough votes to further his cause when Claude Humphrey can be a hall of fame final 15 member in 2003, 2005 and 2006, and then be named a veteran’s committee member finalist twice in four years.