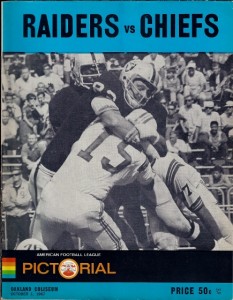 When I first began studying Sid Gillman and the early Chargers, quality AFL information was difficult to find.  I spent many long hours in library archives, sifting through microfilm, hoping to find bits and pieces that would prove important to my research.

There has been an explosion of AFL resources in the years since – web sites, books aplenty, video documentaries, and even a blog called Tales from the American Football League ;-).  It is a real treat (and tremendous time-saver) to be able to find great information on most any AFL subject at your fingertips.

One of the best sources around for game summaries and such is Pro Football Reference.com (www.pro-football-reference.com).  I am not really a stats and numbers guy.  My personal interests lie in the stories surrounding the league, rather than knowing things like the top five AFL rushing leaders in 1967.  However, that information still proves very useful in my research, and so I head over to Pro Football Reference.com fairly often.

Today I was flipping through some files, and came across one of my favorite game programs, from the October 1, 1967, game between the Kansas City Chiefs and Oakland Raiders.  It features a tremendous image of Ben Davidson wrapping up Babe Parilli of the Boston Patriots.  Turns out this was a great game as well. The Raiders opened the scoring in the second quarter, and managed to keep a small lead throughout the game, though the Chiefs didn’t back down an inch.  Daryle Lamonica threw for 238 yards, while Bobby Bell pulled down an interception and Noland Smith totaled 175 yards in kick returns.  A classic AFL battle for sure!  Thankfully I was able to read about it from the comfort of my desk, and not have to travel to the nearest library to read the box score!