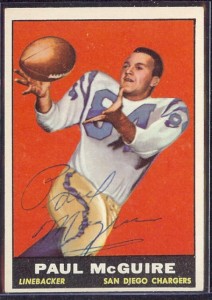 Paul Maguire is better known today as one of the talking heads that used to do commentary during professional football games.  He has worked for ESPN, NBC, and other organizations, and has a nice mix of witty charm to go along with a great knowledge of the game itself.  But Maguire is more than just a glib analyst.  He is also one of just 20 men to play all 10 seasons of the American Football League.  He was drafted by the Los Angeles Chargers in 1960, moved to San Diego with the team in 1961, and was picked up by the Buffalo Bills in 1964, after being cut by the Chargers in training camp.  He played several more seasons in Buffalo, as a part time linebacker and fulltime punter.  Here is an ARTICLE from 1996, in which Maguire reminisces a bit about his AFL days, and also talks about his experience in the booth.  I found it to be a pretty interesting read.