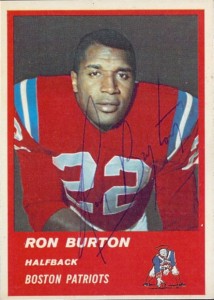 Ron Burton came to the Boston Patriots in the first round of the 1960 AFL Draft.  Burton was a highly touted back for Ara Parseghian’s Northwestern teams in the late 1950s, and was selected All-America in 1959.

Burton immediately found a home for himself in the Patriots backfield, and running back punts and kick offs.  He played in 41-of-42 Patriots games from 19601-962, before a devastating back injury caused him to miss the entire 1963 season.  During his five-year career, Ron Burton carried the ball 429 times for 1,36 yards (3.6 average) and nine touchdowns.  He also caught 111 passes for 1,205 yards and eight scores.

Ron Burton retired after the 1966 preseason, and immediately went to work for the John Hancock Mutual Life Insurance Companies in Boston.  He developed into a highly successful insurance salesman.  Later he transferred to an executive position in public relations, and became one of the nation’s top motivational speakers.

In 1999, at the age of 64, Burton was diagnosed with multiple myeloma (bone cancer).  He lived another three years before passing away in 2003.