>Sports Illustrated does the AFL

>Sports Illustrated does the AFL

Sports memorabilia collectors come in many shapes and sizes, and consequently, so do their collections.  Since coming out with their first issue on August 16, 1954, Sports Illustrated magazine has had a dedicated following among collectors who prize SI for its wonderful covers, which typically feature fantastic imagery from the most current and important of athletic events. 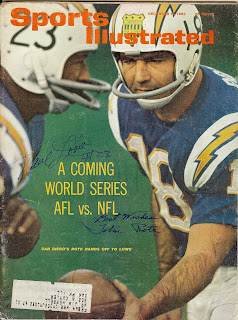 SI was rather slow to dedicate a full front cover to an American Football League subject; The Chargers’ Paul Lowe and Tobin Rote shared face time on the cover from the December 16, 1963, issue, which floated the idea of a “World Series” between the AFL and NFL.
During the 1960s, there were 15 AFL covers on Sports Illustrated.  Not surprisingly, Joe Namath was feature more often than any other AFL player, with his three cover appearances in the 1960s.  Below is the list of AFL SI covers.