>The Hit Heard ‘Round The World

>The Hit Heard ‘Round The World 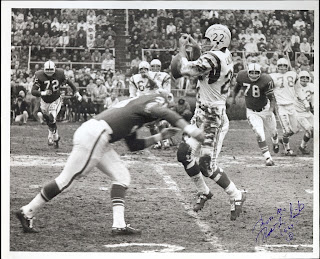 On December 26, 1964, Buffalo’s War Memorial played host to the American Football League Championship Game between the Bills and the San Diego Chargers.  The Bills had finished the season with a 12-2 record, but the 8-5 Chargers featured an exceptionally potent offense.  Although flanker Lance Alworth was sidelined with injuries, San Diego still had weapons in Keith Lincoln and Paul Lowe out of the backfield, Don Norton out wide and Dave Kocourek at end.  Veteran quarterback Tobin Rote and a young John Hadl ran the offense like precision clockwork.
The Chargers jumped out to an early lead, scoring on the opening drive with a 26-yard pass from Rote to Kocourek.  The Bills did nothing with their first offensive opportunity, and ended the series by punting the ball back to San Diego.

The Chargers began their second drive from their own eight yard line.  Six plays later they were in a second-and-10 situation from their own 34, when Tobin Rote took the snap from under center, and after scanning the field for open receivers, lofted a pass to Keith Lincoln out in the flat.  Buffalo linebacker, Mike Stratton, read the play perfectly and moved up to make the hit on the outstretched Lincoln.  The result was a textbook tackle that upset the play, cracked Lincoln’s ribs, and shifted the momentum to the Bills.  Play resumed after Lincoln was helped off the field, but San Diego had lost the swagger.  The Bills shut the Chargers out for the remainder of the game, and earned their first American Football League championship with the 20-7 victory.
After the game, San Diego head coach, Sid Gillman, called Stratton’s hit, “one of the most beautiful tackles I have ever seen in my life.”

Stratton himself recalled the play.  “I keyed on rote and I could see se was looking for a receiver downfield and couldn’t find one.  As soon as I saw that, I sprinted for Lincoln.  One second earlier and it’s pass interference and one second later it’s a missed tackle.  He rolled over and I heard him groan.  I thought he had the wind knocked out of him, but then he didn’t get up. I knew he was really hurt.”
The tackle became known as “The Hit Heard ‘Round The World.”
By Todd Tobias|2011-10-03T16:28:00-07:00October 3rd, 2011|AFL, American Football League, Buffalo Bills, Keith Lincoln, Mike Stratton, San Diego Chargers, Tobin Rote, War Memorial Stadium|106 Comments