A little more than a week ago, I sent a broadcast email to all of the former AFL players for whom I have contact info.  I explained that as they may have noticed, I had begun using occasional guest bloggers on Tales from the American Football League, and I offered to post their articles if they had an interest in sharing their stories with our readers.  I am happy to say that some of them wrote back, and said that they would enjoy participating in the blog. 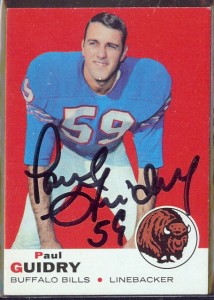 Today we are presenting the first such story, written by former Buffalo Bills linebacker, Paul Guidry.  Paul has kindly offered to write about the varying stages of his career.  In this first installment, he recalls the surprise that came to him on draft day.

Let’s start from the beginning of the recruiting process.  As a college player for the McNeese State Cowboys in Lake Charles, LA, scouts would come by occasionally to talk to you and time you in the 40 yd dash, watch film on you and have you run through agilities  to determine whether to be drafted or not.  Well the LA Rams showed the most interest and told me I would probably be drafted around the 18th round and to stay near my phone, in my home town, in Breaux Bridge, Louisiana.  Well I waited and waited and finally the phone rang and it was from Lou Saban, Head Coach of the Buffalo Bills, who by the way,  had never been around campus or ever contacted me.  When I answered the phone Coach Saban immediately said, “Paul Guidry, we just drafted you in the 8th round of the AFL draft, would you like to play for the Buffalo Bills?”  What was I going to say, “NO!!”  I guess Coach Saban felt certain I would say yes, because his next statement was, “can you meet our agent in Lafayette, LA, at the Holiday Inn in 30 minutes?”  I did, and that’s how my days with the Buffalo Bills began 🙂  Next:  The negotiation process !!!