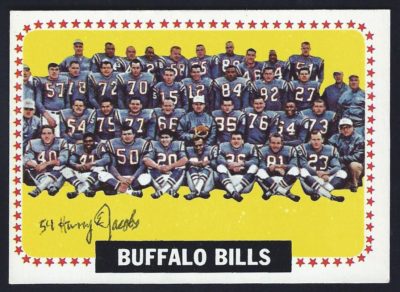 Being a collector of autographed AFL cards has helped me many times in the building of this site.  Most recently, I had an experience with former Patriots and Bills linebacker Harry Jacobs.  I had written a letter to Jacobs, requesting his signature on a 1964 Topps Buffalo Bills team card.  In my letter, I mentioned this site, and how I thought that readers would enjoy hearing whatever memories that he would be willing to share with us.  Roughly a week after I sent out my card, I received a note back.  Mr. Jacobs signed my card, and also wrote a brief note about how he would like to participate in a telephone interview.

You have a great project that I would enjoy being a part of!  As you can see, I am physical problems and have MCI(?), Alzheimer’s and CTE – price I paid for 11 years defensive QB – middle linebacker.  God has been good to me and I have some still left.  If you want to ask specific questions we might be able to get into a conversation that would lend some good things.  I would like to try.  Kay, my wife, could help & we might help you put the AFL story together.  I remember I played in the very first AFL game and very last AFL game & started at middle linebacker, as in all of them.

It was apparent that the note had taken a bit of effort to compose, and so I absolutely did not want to miss out on this opportunity.  As I have written previously, Harry Jacobs played all 10 seasons of the AFL, was a two-time AFL champion, and along with John Tracey and Mike Stratton, set a record by playing in 62 games with the the same linebacking corps.

Mr. Jacobs and I recently connected over the telephone, and had an opportunity to talk about the old AFL.  First of all, he could not have been nicer.  A very polite man, he apologized (unnecessarily) a handful of times, saying that his memory was not what it used to be.  And while he may have forgotten a detail or repeated himself, he shared some excellent stories about the Patriots, Bills, Lou Saban, Cookie Gilchrist, and the old AFL.  Enjoy!