The Tragedy of Howard Glenn

The Tragedy of Howard Glenn 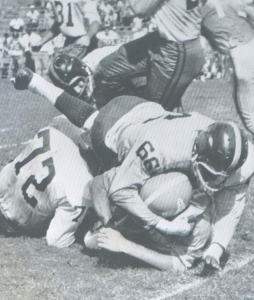 Howard Glenn was only twenty-six years old out of Linfield College near Portland, Oregon, when he earned a spot on the first edition of the New York Titans of the American Football League, wearing number 66 and playing guard.  Through the first three games of that first season Glenn was used as a spot substitute who would give breathers to those in need and filled in for those who were injured. During this time he had found a common thread of interest with new teammate Ernie Barnes, also a first year Titan lineman.  Both Barnes and Glenn shared an interest and talent in art.  Barnes of course would go on to accomplish great things in the field, but Glenn was remembered as quite an artist himself and would often sketch teammates.  Glenn and Barnes became fast friends bonded by art and football.  Then, following the Titans fourth game of the season in Houston on October 9, 1960 tragedy struck.

The week before, in Dallas, Glenn had suffered what was considered to be a minor injury that took more than the usual time to revive him.  The following week while practicing in Houston, Glenn had complained of headaches, but everyone figured that it had more to do with the Houston climate than anything else. Still, Glenn was ready to play against the Oilers on Sunday.  Back in these days, if you walked, you played.  No one complained about injury and medical attention was nearly non-existent.

At game time the temperature in Jeppesen Stadium exceeded 90 degrees with intense humidity still lingering after a mid-week storm that dumped more than two and half inches of rain on the Texas city.  Barnes remembered the day as one of the hottest he had ever known and the sweltering humidity made it difficult to breathe after each play.  Glenn was playing left guard, filling in for injured starter Bob Mischak, Barnes was playing left tackle.  Barnes recalled that during one huddle Glenn telling him “I don’t think I can make it” to which Barnes gave him a nod and tap of encouragement.  Back in the huddle after the next play both players were still gasping to catch their breath.  Now split end Art Powell was also commenting on how hot it was while Glenn repeated his statement again.  It was after that play that Barnes knew something was wrong with Glenn.  Glenn was moving slowly and responded to Barnes inquiry as to his well being that he was sick and had to leave the game.  Another teammate overheard his comment and encouraged him again to stay in the game, to “suck it up”.  Glenn, slightly stuttering, said he’d stay.  With that play the Titans were forced to punt and both linemen jogged off field.

In the third quarter as the Titans attempted a trap play up the middle Glenn got caught in the middle of two stunting defensive players, was sandwiches and knocked to the ground, unable to get back up.  Helped off the field and back on the sidelines Glenn sat quietly on the bench, alone and unattended to for the rest of the game.  He was escorted to the locker room after the game by two trainers where he showered and had a soft drink to cool off.  Seeing him sitting a chair and sensing there was more to this than anyone was aware of, Art Powell called to the trainer to get a doctor to attend to Glenn.  As he was being attended to by a Houston doctor, Glenn became edgy and erratic and demanding to be taken to the hospital before collapsing on the floor and going into convulsions, hacking and gasping to breathe. Finally the emergency personnel arrived and took him to a Houston hospital.

As the Titans boarded their plane for the return flight to New York the players were concerned about Glenn’s injuries but had no idea what caused the convulsions, nor how serious his condition really was.  As the plane taxied down the runway for taken off, it became known that Howard Glenn had passed away 90 minutes after the game.  Barnes, Powell and all of his teammates were devastated.

It was reported the next day that the cause of Glenn’s death was a broken neck but it could not be determined whether the injury occurred the week before in Dallas or in the game the day before with Houston.  Howard Earl Glenn (September 26, 1934 – October 9, 1960) was the only AFL player to die from injuries sustained in a regular season football game.