>Tea Parties and the Simplicity of the AFL

>Tea Parties and the Simplicity of the AFL 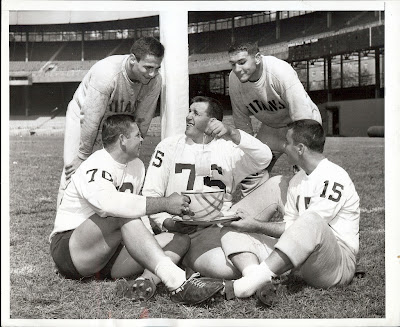 One of the reasons that I really enjoy the AFL is that it reminds me of a time when professional football wasn’t such a huge business. Sure, the players received a paycheck and owners tried their best to turn a profit, but things were much simpler in comparison to modern pro football.
Take, for example, this wire service photo that I recently picked up on ebay.  The photo shows five New York Titans players in the end zone at the Polo Grounds.  Two are holding a giant cup and saucer, while a third is dipping in an oversized tea bag.  The caption on back reads, “October 10, 1960 – The Boston Patriots will have no tea party these New York Titans players say as they gather in the “tea formation” to brew special plays for their Saturday night game, Sept. 17th, with the Patriots at the Polo Grounds.  Gathered around the titanic tea cup are (seated, left to right) offensive captain Gene Cockrell, tackle; defensive captain Tom Saidock, tackle; Dick Jamieson, quarterback.  Standing, left to right, are Fred Julian, defensive halfback, and Pete Hart, fullback.”
This makes me chuckle.  Yes, the theme of the photo is silly, but you have to appreciate the attempted reference, however goofy, to the Boston Tea Party.  The promotion was clever, and not over-the-top, and loud and abrasive.  In a time when professional football players are international multi-media darlings, their likenesses gracing the internet, televisions, billboards, video games, magazines, and nearly every other kind of consumer product, I prefer the simplicity of the AFL.  Though the owners wanted to make money, the emphasis was on the team and game and at least, not openly, on the Corporate America and profit statements.
By Todd Tobias|2012-01-16T17:49:00-08:00January 16th, 2012|AFL, American Football League, Boston Patriots, New York Titans|9 Comments