On January 5, 1964, the San Diego Chargers defeated the Boston Patriots by a score of 51-10 in the 1963 American Football League championship game.  Chargers running back Keith Lincoln cemented his name in the annals of football history by amassing 349 yards of total offense, and scoring on a 67-yard run and a 25-yard pass reception.  In these days pre-merger, Chargers head coach, Sid Gillman, offered to play the NFL champion Chicago Bears in a game to determine the true champions of professional football.  When Bears’ owner, George Halas, refused Gillman’s offer, the Chargers coach  had “World Champions” engraved on his team’s championship rings.
Much has been said and written about that 1963 Chargers team in the years that have passed.  Sid Gillman protege, Ron Jaworski, did a masterful job of breaking down the Chargers success and Gillman’s game plan for that legendary victory in his book, The Games that Changed the Game (Random House, 2010).  A mythical championship game between the offensively-gifted Chargers and defensively-dominant Bears has been hotly debated by historians.  Lance Alworth, Sid Gillman, Ron Mix, and then-defensive backfield coach Chuck Noll, have since been inducted into Pro Football’s Hall of Fame.  ESPN’s Chris Berman has even jumped into the fray by declaring the AFL Chargers to have the best uniforms in all of pro football history.
Perhaps the fact that this remains San Diego’s only major sports championship contributes to the recollections of the 1963 team.  But I think that the team itself is the cause for its own popularity.  Coming off an injury-riddled 4-10 season in 1962, Sid Gillman sequestered his team in the hills of Boulevard, California.  Gillman’s idea was to get his team away from the temptations of city life, and force them to focus on football and bond together as a team.  And so the Chargers spent their 1963 training camp at a dilapidated facility called the Rough Acres Ranch.  What the “Ranch” lacked in air-conditioning and comfort, it made up for with rattlesnakes and grassless practice fields.  But when the Chargers finally came down off the hill, they were primed and ready to play. 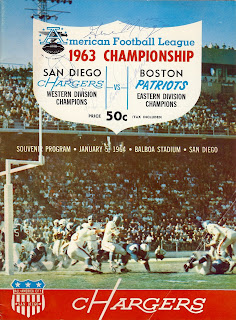 They ripped through the regular season with an 11-3 record, and secured the AFL Western Division title with a 58-20 victory over the Denver Broncos in a December 22nd game at Balboa Stadium.  Two weeks later, behind a game plan that Gillman himself named “Feast or Famine,” the Chargers decimated the Patriots.  Gillman’s plan, which was heavy on motion, deception, and the use of his tight end, consistently trapped the blitzing Patriots linebacker out of position, and resulted in many plays that went for long yardage and six points.  Tom Addison, the Patriots all-star linebacker, was quoted in Jeff Miller’s AFL classic, Going Long, as saying, “I’ve never been on my knees so much in my life.  I got knocked down on every Goddamn play.”

That kind of domination is rare, especially in a championship game, and in fact it led many people to begin questioning the supposed dominance of the NFL.  Noted football personalities came out on both sides of the issue, some supporting the Chargers while others backed the Bears.  Sadly, that game never came to be, and now, 48 years later, we have nothing but game films and statistics to back up our own beliefs of what might have been in the lightning bolt-clad Chargers had played the Monsters of the Midway…  Oh, and those Chargers rings that already say, “World Champions.”