The #1 1964 Topps Football Set in the Hobby Goes up for Auction – Love of the Game Auctions!!

Home/American Football League/The #1 1964 Topps Football Set in the Hobby Goes up for Auction – Love of the Game Auctions!!
Previous Next

The #1 1964 Topps Football Set in the Hobby Goes up for Auction – Love of the Game Auctions!!

As a memorabilia collector, I try to keep abreast of interesting AFL-related items that come up for sale.  Recently, Love of the Game Auctions opened up their Summer 2013 auction, included in which is a listing for the highest-graded 1964 Topps football set in existence.  As many of you know, the 1964 set was Topps’ first efforts with an AFL-only card set, and as such, carries some historic significance to AFL fans and collectors.  I had an opportunity to catch up with LOTG Auction Director, Al Crisafulli, and ask him a few questions about this incredible set.

1.  You will be auctioning the #1 1964 Topps football set on the PSA Registry in your upcoming Summer Auction.  You obviously cannot disclose the name of the consignor, but what can you tell us about the set?  How long did it take to put together?  How long has it been the #1 set? 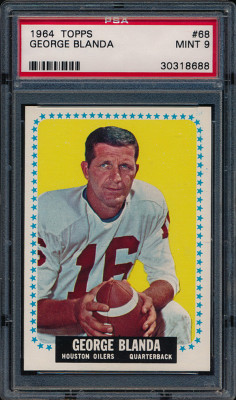 This is a pretty phenomenal set.  It’s been #1 on the PSA Registry for 8 of the last 11 years, and has a cumulative GPA of 8.28.  The consignor is a collector I’ve known for years; he’s got a number of well-known high-grade sets, but this one has been his baby for a long, long time.  He’s upgraded every card in the set, some as many as five or six times, looking for the absolute finest example possible.  He’s worked on this set consistently for more than a decade.

The numerical grades of the cards are one thing, but the diligence with which this set was assembled, the best examples of each card that the consignor could find, is what makes this set one of the highest-quality vintage football sets ever assembled, in my opinion.

2.  Finding nicely-centered 1964 Topps cards has always been very difficult.  What can you tell us about the centering and overall grades of this particular set?

As with most other Topps sets from the 1960s, well-centered examples are really difficult to find.  Miscut and off-center cards are common.

The consignor of this set is a perfectionist when it comes to centering  and overall sharpness.  There’s not a single card with a qualified grade in this set, and every card is the best-centered example he was able to find, in poring over tens of thousands of 1964 Topps Football cards over the last decade or so. There’s no card graded lower than 8, with 41 cards graded 9. I won’t tell you that every card in the set is perfectly centered, but I can say you’d be hard pressed to find nicer examples. 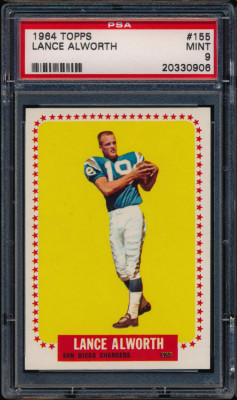 I can’t say enough that this set was assembled card-by-card.  That’s a phrase that’s thrown about quite a bit in auction descriptions, but this one was truly put together that way.  The collector has several other 1964 Topps sets in NM-MT condition, with cards that he didn’t think were “good enough” for his main set.  The cards are absolutely fantastic – you can see scans of each one on the PSA Registry under “Wolfbear’s 1964 Topps.”

3.  This set features rookie cards of AFL stars Daryle Lamonica, John Hadl, Bobby Bell and Buck Buchanan, as well as the first Topps cards of Len Dawson, Nick Buoniconti and Lance Alworth.  Aside from that star power, what are the other key cards?  Are there certain cards that are particularly difficult to find in top condition?

The set has a number of difficult short prints, among them the cards of Jack Kemp, Billy Shaw, George Blanda, Bobby Bell, Buck Buchanan, Len Dawson , Tom Flores, Jim Otto, Fred Williamson, Paul Lowe and Ron Mix.  A number of those cards are rookie cards, and a number of those players are Hall of Famers, which only adds to the desirability of those cards.  The  checklist #176 – the last card in the set – is also a short print, which makes it super tough.  And of course the checklists are always tough to find in high-grade.

In this particular set, of all those short prints, the Blanda, Bell, and Buchanan are all graded MINT 9, with the others graded 8. 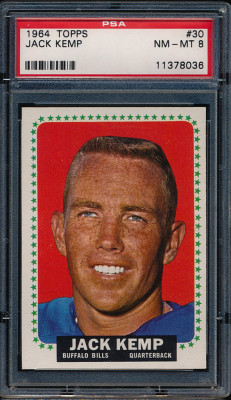 4.       Topps jumped back into making AFL cards in 1964, after a two-year hiatus.  This was their first AFL-only set, as the 1961 issue featured both AFL & NFL players.  What do you think that does for this set is terms of overall historic relevance?

I think there’s a growing interest in the AFL, particularly as historians like yourself start to chronicle the history of the league and the impact it had on the current NFL.  Similar to the old ABA, there are a lot of great stories buried in its history, and as the players age, interest in their collectibles continues to rise.

I think the 1964 season was big for the AFL because that’s the year it signed a big TV deal with NBC, which gave the league a big boost.  This set really documented a watershed moment – not only in AFL history, but for pro football in general.  The competition between the two leagues, which really started to take shape in 1964, is what built the NFL we know today, in many ways.

5.       You have been involved in sports memorabilia for more than 20 years.  Now as an auction house owner, how does the AFL play into your auctions?  Do you have people asking specifically for AFL-related cards and memorabilia?

I think there’s been a big increase in collector interest with respect to vintage football material in general.  Football collectors are beginning to develop a respect for the history of the game that’s similar to what we see in baseball.  In cards, I see it in the incredible prices we’re seeing with cards like the 1894 Mayo John Dunlop and the 1935 National Chicle Bronko Nagurski, but I’m also seeing it with interest in vintage memorabilia, autographs, and equipment.  As the interest in vintage football increases, interest in the AFL increases as well. 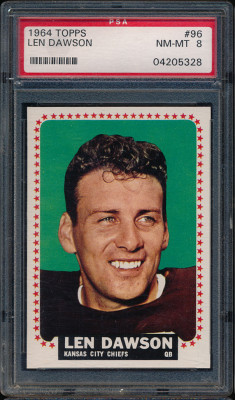 6.       In terms of values, do you see a lot of room for growth in AFL memorabilia in the future?

Sure.  I think fans recognize football as more of a TV sport than the other major American sports.  Because of that, I think some of the game’s history has gotten overshadowed by the TV highlights we see all the time – the Immaculate Reception, Joe Montana throwing an impossible touchdown pass, Tony Dorsett’s 99 yard run against Minnesota.  As fans start to dig deeper to learn more about the history of the game, and as people like you continue to do the research and provide the stories, interest in the memorabilia will only increase.

As the legends of these great players and games continue to grow, so will interest in mementos documenting them.

7.       If readers have cards or memorabilia that they would like to consign to your auctions, how can they contact you?

Anyone can always get us by email at info@loveofthegameauctions.com, or by phone at 973-452-9147.  We’re actively looking to strengthen our vintage football offerings, particularly vintage cards and early memorabilia.