Guest blogger, Bob Swick, takes a stroll down memory lane with his 1965 Topps cards.  How many of us have similar memories to Bob’s?  Buying bubble gum cards with nickels and dimes, chewing gum and sorting cards, and praying those last few cards for your set would show up in the next pack.  It was a rite of passage for many of us! 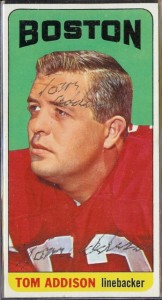 In 1965, I opened my first packs of football cards and my road to a lifetime of football card and memorabilia collecting began.  I was fascinated by opening up packs of cards that were much bigger than the NFL Philadelphia brand of the same year.  Topps gum seemed sweeter to me, and I really thought the “rub offs” that were inside these packs were cool to rub off on my school binder.

The 1965 Topps American Football League football cards are a special set in collecting lore.  One of the iconic rookie cards of football is in this set.  Broadway Joe Namath graced the set and has driven its value for many years now.  My Namath rookie card has wear to it, as I studied these cards over and over again as a seven-year-old growing up in a very rural town in Connecticut.  I always thought it was so cool that each team was grouped in the same number sequence, for example my BostonPatriots number’s 1 to 22 had a loud green background which reminded me of a football field.   The Buffalo Bills cards had that great light purple background.  The New York Jets with Broadway Joe’s serious holding of the football with a bright yellow background is an unforgettable part of that set.  All the colors to me were so bright and vibrant in the drabness of winter. 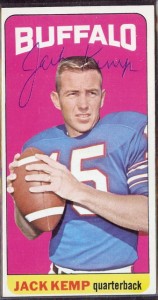 I also thought the checklists were neat in that I was able to keep track of what cards I needed for the set.  But I also remember the frustration that I was not able to finish the set of 176 cards as the candy and drug store that I bought the cards from ran out of the packs, and that the new baseball cards from 1966 took the place in the display rack where my beloved Topps football cards were. I finally finished that set years later, as I did most of my sets.  Back in the 1960’s, one was extremely limited in finding cards other than buying them in pack form.   There were no card shops selling cards!  I can still remember hoping that one day all of the packs that I opened would yield me a complete set.  However that was not meant to be for a seven-year-old, but I became a student of the game because of it. Great memories and fun from the 1965 American Football League season all because of some simple printed cardboard.