The Best of Times

The Best of Times

Buzz Ponce, author of the book-in-progress, Finding Frank; Full Circle in a Life Cut Short, gives us another brief look into the life of linebacker, Frank Buncom, and another chapter of his upcoming book!

Frank Buncom’s career with the San Diego Chargers mirrors the team’s overall best of times in its entire 52 year history. His tenure with San Diego – 1962 to 1967 — reflected not just his best years as a football player but also the Chargers’ best, all-time seasons. The fact that the team’s lone championship came in 1963, Buncom’s second year, helps to bolster that hypothesis.

Strikingly, at no other time in the team’s history has it accumulated a better winning percentage than during those six years that Buncom played for San Diego. The Chargers rolled up 47 wins in those seasons and while that number exactly matches six-year runs by future Chargers teams (coached by Bobby Ross and Marty Schottenheimer), those seasons saw a 16-game schedule, while the Sid Gillman era saw a regular season of only 14 games. From 2007 to 2011, the team went on an all-time best ride with 49 wins under Norv Turner, but again, that’s with an additional two games per year, meaning a total of 10 games more overall than during Buncom’s reign with San Diego.

That all-time high winning percentage takes into account the team’s dreary record in 1962, dipping to a low of just 4 wins versus 10 losses – by far Gillman’s worse year as the head coach in the American Football League. The ’62 season was an anomaly when compared to the two years it was sandwiched between; 1961 saw the team go 12-2, 1963 brought the AFL Championship with its 11-3 mark.

If one were to put a microscope on Buncom’s overall football career, including his playing days at USC, and make a judgment on what his best season was, 1965 would stand out like a beacon in spite of his team’s embarrassing season ending loss.  The Chargers led the AFL in both defense and offense that year and were heavily favored to beat the Buffalo Bills in the league championship game, having already bested them 34-3 in their first match-up earlier in the season, and then playing to a 20-20 tie in their second meeting.

As the football gods would have it though, the Bills trashed San Diego for the AFL title in front of the Chargers’ home crowd at Balboa Stadium. The Chargers offense – and defense for that matter — didn’t show up that day as Buffalo’s Jack Kemp (later Republican Congressman Jack Kemp of supply-side economics fame and a future vice presidential running mate with presidential candidate Bob Dole in 1996) threw two touchdown passes and Hungarian soccer-style kicker Pete Gogolak added three field goals.

The Chargers were clearly caught feeling immensely over confident in their ’65 title game. In an Associated Press article the day prior, the opening line was, “The San Diego Chargers are taking a relaxed and confident attitude toward Sunday’s American Football League championship game.” Tight end Dave Kocourek, a key cog for the team throughout the early ‘60’s, was quoted as saying, “Our team is in a relaxed state of mind. I think that’s a good sign. Maybe it’s the season – green trees, green money. Whatever the reason, everyone’s in a really good mood.” [1]

That good mood didn’t last long once the game started as the Bills romped 23-0.

Gillman, revered as a football strategist par-excellence and one of the very early pioneers of the so-called West Coast offense, may have contributed largely to his team’s state of over confidence and subsequent loss. He predicted a San Diego blowout and told columnist Larry Felser of the Buffalo Evening News before the game, “You know, there is no way we can lose this game.”

Gillman, an eventual Hall of Fame coach, said the reason was, “Because of Kemp. We’re going to win this game because Kemp has the maturity of a 10-year-old girl.”[2]

Kemp, still smarting from Gillman’s release of him from the Chargers three years earlier, found his comeuppance.

A sobering sidebar for the city of San Diego in that ’65 game (as well as the Chargers’ loss the previous year in the AFL championship game to Buffalo) is the fact that the Chargers’ title in 1963 still stands as the only major sports crown won by any sports team for San Diego. No other metropolitan area with at least two professional sports teams has gone longer than “America’s Finest City” between championships.  Adding salt to the wound, the 1963 win is also the only time the Chargers have beaten the New England (Boston) Patriots in a postseason game. 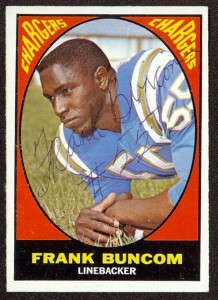 If it was the best of times during Buncom’s six years in San Diego, just how valuable was Buncom as a football player? How significant was his success for the Chargers during their wonder years?

His rookie season in 1962 saw him crack the team’s starting lineup as an outside linebacker, moving from the defensive line as a collegiate, and quickly becoming known as a bruising force on an already punishing defense. He was smart, quick, very agile, and “hit like a mule” as teammates later recounted.

Buncom joined an already stalwart defensive lineup that included middle linebacker Chuck Allen and outside linebacker Emil Karras. Allen, Karras and Buncom formed a linebacking trifecta that year that would last three seasons; Buncom and Allen would team together until ’68. Buncom led that corps in interceptions his rookie season with five – an impressive number by any standard, and speaks of his quickness and agility.

That same defense also featured the game’s original “Fearsome Foursome.” Although the New York Daily News ran a feature story way back in 1957 profiling the New York Giants’ defensive group and headlined, “A Fearsome Foursome,” it wasn’t until the Los Angeles/San Diego Chargers came along in 1960 that the term gained popular acceptance. The Fearsome Foursome saw several different versions with the Chargers, but in 1962 was composed of behemoth lineman Ernie Ladd, defensive end Earl Faison, and linemen Ron Nery, and Bill Hudson.

Though seemingly nearly invisible to most fans and followers throughout his career and throughout the AFL, Buncom did receive the “Charger of the Year” award in 1964 from a group calling itself “The Fan-Attics,” a spin-off of the notable Chargers Backers club.  In a letter to Buncom dated February 1, 1965, the Fan-Attics explained that, “Our choice was unanimous…it was Frank Buncom all the way! We hope you will accept this award in the spirit in which it is given – a token of appreciation for your outstanding performance. Congratulations on an outstanding year and good luck and good health to you.” [3]

By 1965 he had established his bonafides as a certifiable key player for the San Diego Chargers; hardly a headline generating name but roundly recognized by his peers as one of the best and most dependable players in the American Football League. Still largely unheralded by the average fan, he was nevertheless named to his first AFL All Star team (to differentiate from the rival National Football League, the AFL used the term “All Star” during its time versus the NFL’s “All Pro” designation) in 1964, duplicating that honor again in ’65 and ’67.

Sports Illustrated confirmed Buncom’s status as a team leader in its “Pro Football 1965” edition, saying, “The linebacking should be the best in the Chargers‘ history, with Chuck Allen in the middle and Frank Buncom on the right…”[4]

As San Diego galloped through its’65 schedule going 9-2-3 tripped up only by losses to the Patriots and the Chiefs and ties (this was before the introduction of pro football’s sudden-death format to determine tie-breakers) to Kansas City, Boston, and Buffalo, the Chargers were clearly the class of the AFL, outscoring their opponents 380 to 227 and ending with a winning percentage of .818, far ahead of the Bills’ .769. Then their meltdown to Buffalo occurred in the title game and their dream season evaporated. But Buncom’s role throughout the year as a team spearhead was solid and noteworthy, culminating on his selection to the league’s All-Star team as a starting linebacker.

The AFL, always preemptive for something different and unusual to set itself apart from its fierce rivals in the NFL, radically departed from the traditional East vs West format for that season’s All Star game. In a one-year experiment, the league pitted its champion Buffalo Bills against an opposing team comprised of standout players from the other seven teams in the league.

As was typical of the AFL, the game proved to be a rock ‘em, sock ‘em, high scoring contest. The 35,572 fans that shuffled into Houston’s Rice Stadium and the NBC national television audience with Curt Gowdy and Paul Christman calling the action, were treated to rookie quarterback Joe Namath’s come-from-behind theatrics. The All Star team thumped the Bills 30-19 with Namath, resplendent in his white shoes and swashbuckling manner throwing for two touchdowns, being named the game’s offensive MVP.

And it was the original number 55 for the Chargers — a guy with the unheralded name of Frank Buncom — playing the entire game at right linebacker and being credited with five tackles and one sack, who was named by sportswriters as the All Star game’s defensive MVP.

By any measure, 1965 was Buncom’s finest hour as a football player. It was his zenith, his time to shine as one of the game’s best.  Though he again attained All Star status in 1967, Buncom’s football light never shined as bright as in ’65.

The Chargers slipped to a sloppy 7-6-1 record in 1966, finishing a distant third in the AFL Western Division. Probably the highlight of that season was the team’s swan song at run-down and outdated Balboa Stadium. They moved into sparkling new San Diego Stadium (later named Jack Murphy Stadium and later still, Qualcomm Stadium) the next year. That season also was the debut of the AFL-NFL World Championship Game where the AFL champs Kansas City Chiefs met the NFL’s Green Bay Packers in January of 1967 in the Los Angeles Coliseum, marking the beginning of the phenomenon forever since called the Super Bowl.

The next year saw San Diego slightly improve to 8-5-1 in its new home, but still languishing in third place in the tough AFL West of the time.  The team lost its final four consecutive games that year, sealing its fate as an also-ran. The highlight for Buncom, in his final year with the Chargers, was being selected for his third — and last — time to the AFL All Star team.

The largest crowd in AFL All Star history saw the East squad squeak out a 25-24 victory at the Gator Bowl in Jacksonville, Florida, with Namath again being named MVP for his offensive heroics. San Diego Charger Speedy Duncan was named defensive MVP based on his record-breaking All Star game touchdown punt return.

Buncom, playing for the last time as a Charger, packed up after the game, returned to San Diego, and began hearing rumors of his status in the upcoming AFL draft that spring that was being put in place to seed the league’s newest team. Unknowingly at the time for him, he would be wearing a Cincinnati Bengal uniform in 1968.

Frank Buncom’s – and the Chargers’ – best of times were over. His six year tenure with San Diego had come to an end.