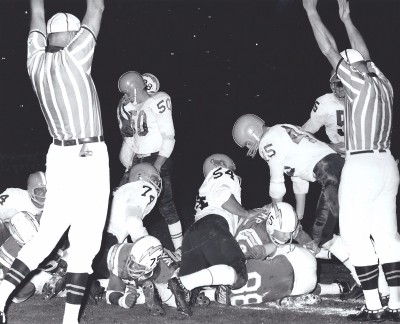 I never cease to be amazed at the types of things that people study when it comes to the AFL.  I get all sorts of interesting questions tossed my direction, some of which I can answer, others I cannot.
Just yesterday I received an inquiry from a devoted reader living in Italy.  As I am not familiar with the intricate details of most AFL uniforms, I offered to post his question to the board.  We have some very knowledgeable Denver Broncos collectors who read Tales, as well as several former AFL players.  Here is hoping that someone can help out…
Hi Todd,
In reading today’s post “What would you ask Lance Alworth,” one thing came to my mind as soon as I started thinking of a question.  It’s not related to Lance’s career so I don’t know if it fits the purpose, but I think it’s interesting.
As you certainly know the Broncos changed their uniforms in 1962 switching from brown and mustard yellow to orange and blue. The helmet was orange with a horse logo. The first couple of regular season games the logo was dark, then they switched to a white one.
http://farm6.static.flickr.com/5028/5680828320_aace813f73_o.png
http://farm3.static.flickr.com/2585/3921783524_5726a2d986_o.jpg
http://farm6.staticflickr.com/5226/5648175514_9234f3e144_o.jpg
With the merchandising market having a boom in the 90s, a lot of reproductions started appearing on the internet showing a brown logo.
http://www.sportshopdirect.com/Images/products/caseys/9585597640.jpg
http://www.ebay.com/itm/Throwback-Denver-Broncos-Crazy-Horse-1962-Alternate-Football-Helmet-Decals-/321184629768
Then started a debate with a lot of eyewitnesses saying the dark logo was a brown horse (which doesn’t make much sense but still…) and a lot of other eyewitnesses saying the logo was in fact blue (which it makes a lot more sense).
Broncos’ VP of Corporate Communications Jim Saccomano tackled the topic in 2011 asking 3 reliable sources: Chuck Garrity, former Denver Post sports editor, Ronnie Bill, who was the Broncos assistant equipment manager in 1962 and Al King, publicity man for the Broncos in ’62.
http://blog.denverbroncos.com/jsaccomano/saccomano-mystery-solved-horse-was-blue-in-62/
Key part on Saccomano’s post: Ronnie Bill added that, “I was the one who put the decals on the helmets every week, and there was never any brown horse. Every week I had to touch up the helmets and get them ready for that week’s game. There was nothing brown in the 1962 uniform.”
Mystery solved? Maybe…
Gene Mingo, Frank Tripuka and Jerry Strum, among other former players said they were 100% sure the horse was brown… Saccomano didn’t interview them.
I’m an uniform maniac and I’d really like to have the mystery solved for good, so it would be interesting to ask former players (and you are in contact with a number of former AFL players as it seems) if they remember which color it was the dark horse decal.
What do you think? Are you interested in the matter?
Sorry for my sloppy English!
Take care and keep up the great work, Mako
So, does anyone have any thoughts on this?  Goose Gonsoulin?  Gene Mingo?  Tom Jacobsen?

One thing that I will say…  Saccomano states in his article that the Broncos debuted their new uniforms and dark horse logo helmet in a game against San Diego on September 7, 1962.  That is not wholly correct.  The photo above is from a preseason game between the Broncos and Chargers that was played on August 18, 1962.  If you take a look at #54 for the Broncos, Wahoo McDaniel, you will see that he is wearing the dark horse logo nearly a full month before the release date offered by Saccomano. 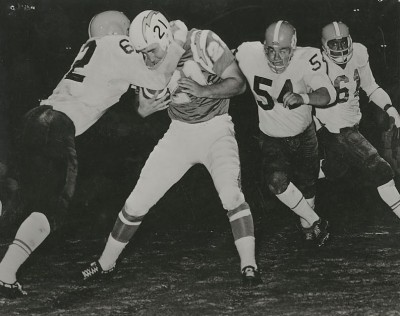 However…  What is even stranger is the next photo, which comes from the same preseason game of August 18, 1962.  It appears that McDaniel again is the only player wearing a horse logo on his helmet.  But if you look closely, this logo (which is on the other side of his head as the dark logo, appears to be white!  Could it be that he wore one of each type of logo during the preseason as some sort of test?  Or could it be that the flash from the camera just made one logo appear white?  Who knows?  Who can help?
By Todd Tobias|2013-08-20T05:59:21-07:00August 20th, 2013|Denver Broncos, Wahoo McDaniel|21 Comments