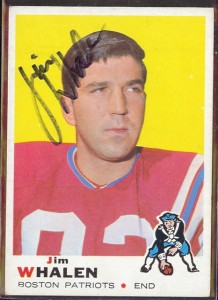 Jim Whalen was a third-round draft pick of the Patriots in 1965, and played with the team through 1969.  He then spent two seasons in Denver and one in Philadelphia.  He is a member of the Patriots 10th Anniversary Team.

A page about Jim Whalen can be found on the Patriots website HERE.