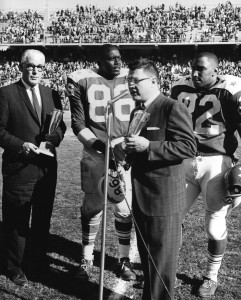 On January 13, 1963, the AFL’s Eastern and Western Division All-Star Squads met on a chilly 49-degree afternoon in San Diego’s Balboa Stadium.  The squads, filled out with the best that the American Football League had to offer, fought to a 21-14 end, with the West winning their second consecutive all-star match.  The Most Valuable Player honors went to the Dallas Texans running back, Curtis McClinton, and San Diego Chargers defensive end, Earl Faison.

McClinton rushed eight times for 104 yards, an average of 13 yards-per-carry, the highlight of which was a 64-yard touchdown romp that opened the game’s scoring in the first quarter.  Said Western Division coach, Hank Stram, “We got off to a fast start on McClinton’s run, and we thought it was going to be a wild game, but the yardage was tough to get after that.”

Big #86, Earl Faison, led a Western Division defensive unit that held the opposition to just 143 net passing yards and 98 yards on the ground.  His relentless pass rush helped force Eastern quarterbacks into throwing five interceptions.  Said Eastern coach, Pop Ivy, “We were not blocking well, we couldn’t handle the Western line.  They’ve got a lot of big horses in there, and we failed to take advantage of our opportunities in the first half…  You take the best defensive linemen and backs, and there won’t be much scoring.”

The first and third AFL All-Star Game was also played in San Diego.  The remainder of the all-star games were moved to other stadiums across the country.