Gino Cappelletti and the 1964 Season Wrap-Up

Gino Cappelletti and the 1964 Season Wrap-Up 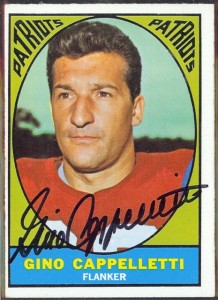 I felt like writing something about the Patriots’ Gino Cappelletti, whom I feel is one of the most underrated stars of the AFL.  Cappelletti was a great receiver and kicker, played all 10 years of the AFL, and ended up as the league’s all-time leading scorer.  Still he gets little recognition for his accomplishments.

Based on that I went to the S.I. Vault, and looked for the first article that I could find that included Cappelletti’s name.  Oddly, it was a preview of the 1964 AFL Championship game.  Cappelletti was included as the Patriots and Bills were still to play what was essentially a divisional championship game, and S.I. then evaluated all three teams chances in the championship game.  Author Edwin Shrake was very complimentary of Cappelletti.  After stating in the paragraph before that Babe Parilli was the best quarterback in the AFL (really?) he had the following to say about Cappelletti, “He is small and slow. But Cappelletti lulls defenses into a doze and then pops up so far open that it looks as if he had sneaked out of the bleachers…  In one recent game Cappelletti ran a succession of square-outs, then ran another square-out, took two more steps, whirled and went deep and was open by 20 yards for a touchdown.”

Unfortunately, that was about it for the Patriots and Cappelletti (and the Bills, for that matter) in Shrake’s mind.  The remainder of the article was about how the only way the Chargers could lose was if the game was played in inclement weather.  Shrake lists the Chargers many talents and throws just a few bones to the Bills, the greatest of which is to say that Buffalo probably has a better offensive line.  Well, I guess that is why they still play the game instead of leaving it to sportswriters to determine outcomes.  As we all know, Mike Stratton clobbered Keith Lincoln, and the Bills beat the Chargers in the first of two consecutive AFL championships.

The full article is called, “…in The AFL, Guile And Go Should Win For The Chargers; Neither the Bills nor the Patriots are likely to beat San Diego unless the game is played in fierce weather,” and can be found HERE.

I guess I will continue my Cappelletti research, and write about Gino another day.