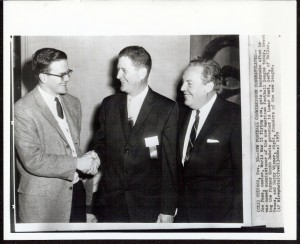 Joe Foss (center) is congratulated by Lamar Hunt (left) and Harry Wismer (right) after being named as the first commissioner of the AFL.

For the past few years I have been putting together a collection of wire service photos that represent some of the more important moments in AFL history.  I recently opened a new photo gallery for this collection, which can be found on the home page.  The gallery is titled, “Important Moments in AFL History.”

The gallery opens with a photo that was distributed by the Associated Press on August 1, 1959.  This image, which is the earliest piece of AFL memorabilia that I have found, shows a young Lamar Hunt, and carries the following caption: DALLAS, TEXAS – AUG 1 – SEEKS NEW FOOTBALL LEAGUE – Lamar Hunt, 26, son of oil billionaire H.L. Hunt of Dallas is seeking to organize a new pro football league which will try to start play in 1960.

There are currently 13 images in this gallery.  The moments represented are:

I will continue to add more photos to this gallery as I am able to locate and add them to my collections.  Among the themes that I would like to represent with images are each of the first four super bowl games, the last game in league history (1970 AFL All-Star Game), the expansion Dolphins and Bengals, and Joe Namath signing his first contract with the Jets.

I would be interested to hear from readers as to what other moments should be considered for inclusion in the gallery, and the reason for their importance.  Perhaps Chargers moving to San Diego?  Texans moving to Kansas City?  Sonny Werblin buying the Titans and bringing financial stability to New York?  What moments do you feel are most important in AFL history?