Last month I had an opportunity to spend a morning with former Chiefs wide receiver, Chris Burford.  We watch video, talked AFL, and generally had a great time.  Before I left, Chris told me that he had a gift for me.  During his time in Kansas City, Chris worked as a sportscaster for one of the local television stations.  He said that he had acquired a film clip of Lance Alworth at some point during that time, and had long since forgotten what was on the film.  He knew of my affinity for Alworth, and wanted me to have the clip. 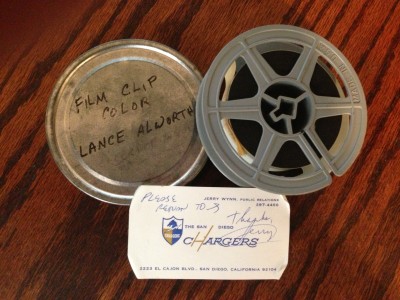 Inside the small film canister was a short reel, and business card for former Chargers public relations director, Jerry Wynn.  On the card Wynn had written, “Please Return,” (whoops!), but the backside had a note saying, “LANCE ALWORTH CATCHING 10 PASSES FROM JOHN HADL FOR 213 YARDS AGAINST OAKLAND RAIDERS’ TOUGH DEFENSE.”

As soon as I got back to San Diego, I hustled over to a local video transfer store, and had the 16mm film put onto a DVD.  I did a bit of research, and learned that Alworth caught 10 passes for 213 yards and one touchdown in the October 29, 1967, game against the Oakland Raiders.  Sadly, his efforts were wasted, as the Raiders beat the Charges by a score of 51-10.  Still, it is awfully nice to see Bambi dazzling the crowd and befuddling the Raiders at the Oakland Coliseum.